Dyuthi Dhanush fell from in between the grill of the staircase in their building in Mahboula. 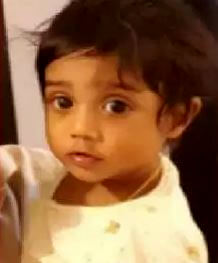 Dyuthi Dhanush is the daughter of Dhanush and Devimol, who hail from Pathanamthtta, Kerala, India. Dhanush is working with Chevron Company and Devimol is a staff nurse at Taiba clinic.

According to a source, when their maid opened the apartment door to dispose of the waste in the garbage bin, Dyuthi slipped passed the maid and fell from in between the grill of the staircase causing death.

UPDATE: The Indian couple has been detained for interrogation and charged with negligence after their child fell to her death from a third-floor apartment in Mahboula, reports Al-Rai daily. The daily added, the parents were taken into custody after they rushed the lifeless body to the Adan Hospital.

During interrogation the parents denied the charge of negligence but later admitted to leaving the child alone in the house. According to the daily the infant was less than a year old.