April 8: Kuwaiti medical crew at the Maternity Hospital successfully carried out a rare ovarlectomy- surgical operation to remove a fibroid weighing 33 kgs from the abdomen of a woman who had been suffering from the disease in her left ovary, reports Al-Qabas daily. 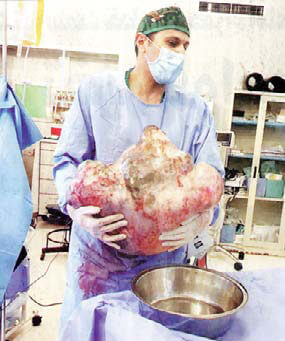 According to the Consultant Obstetrics and Gynecology Surgeon and a professor at the Faculty of Medicine in Kuwait University Dr. Walid Fahad Al-Jassar, the patient has since been discharged from the hospital and is now going about with her normal activities without experiencing any symptom of medical issues.

He explained that he was the one who supervised the operation on the 55-year old patient. She was suffering from acute pain in her swollen abdomen such that she could not sleep or eat. She heard about a similar operation about a year ago and she approached the doctors for the possibility of carrying out the operation. Dr. Al-Jassar revealed that the medical crew, which included Dr. Wafa Al-Duwaisan, carried out necessary X-ray tests before the operation. This gave them the opportunity to ascertain the location of the fibroid on the left ovary. He said the operation went on for three hours before the 32.5-kg fibroid could be removed completely, adding, “The patient was taken to the Intensive Care Unit directly after the surgery for rest and further medical follow-up, considering the intensity of the operation”.