‘Accept Me’ campaign promoting culture of coexistence in Kuwait 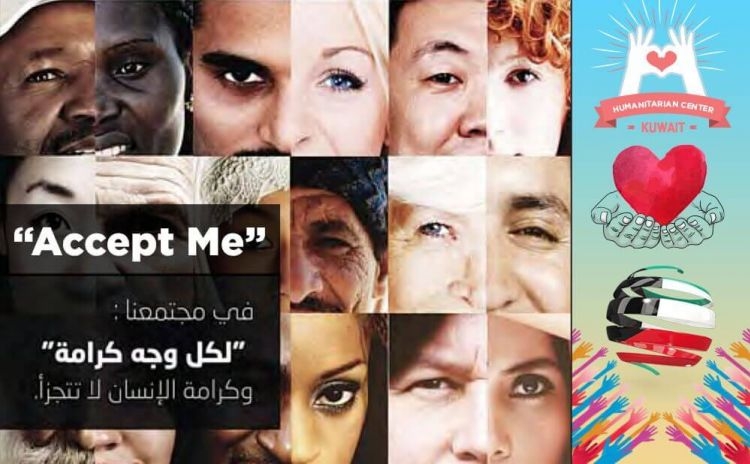 In a press statement, the Ambassador of Arab Tolerance Thought in Kuwait Lila Mukthar stressed the urgent need to instill the culture of coexistence and acceptance of others in the souls and minds of the young generation.

She affirmed that this campaign will contribute effectively in creating a generation that is capable of bearing responsibilities and leading the next phase in a positive manner.

Such a culture constitutes a strong establishment of national unity which should be based on trust and mutual respect among the community members. Al-Mukhtar expressed gratitude and appreciation to everyone who contributed to the campaign, particularly the Rayfan Foundation for Human Rights and Development which is headed by Maryam Ibrahim, and the campaign advisor Sahl Al-Junaid who played a major role in directing the campaign.

Regarding the first phase of the campaign, she explained that it includes a campaign on social media due to its major role in spreading awareness among young people. This will contribute to promoting values of the culture of acceptance of others in the Arab societies.

Expressive posters will be designed to deliver the campaign’s message in a simplified and sophisticated manner with the aim of achieving the desired objectives. Regarding the second phase of the campaign, Al-Mukhtar explained that it includes an integrated study based on “discussion foci” for dealing with the subject of acceptance of others in terms of religion, race or thought.

These focal points will target young people in educational institutions, public and private universities and civil society organizations to come up with solutions. An integrated report will be prepared to provide a factual knowledge base about the culture of accepting others in Arab societies based on a scientific methodology. This study will then be distributed to the decision- makers to be adopted or to be used as at least a reference for the indicators that will help in diagnosing the problem and finding suitable solutions for it.

Meanwhile, Head of the Rayfan Foundation for Human Rights and Development and main sponsor of the campaign Maryam Ibrahim said the absence of a culture of tolerance and acceptance of others is one of the major challenges facing the society currently. She said, “This is a responsibility that must be taken up by all without any exception. Efforts must be united for this purpose. Young people must be involved to solve such issues in order to contribute towards building the desired Arab societies”.

Ibrahim indicated that spreading the culture of tolerance, and acceptance and recognition of others are theoretically accepted and useful but it requires work and struggles in order to consolidate the value of this culture and apply it in daily life, adding that it will definitely bring a high interest to all without any exception.

She explained that one of the most important objectives of the campaign is to involve young people in discussing issues, and formulating and marketing proposed mechanisms for supporting the culture of acceptance of others within the community.