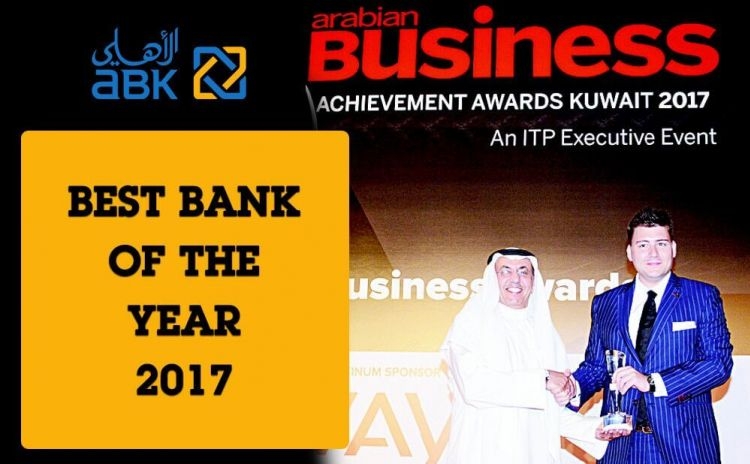 KUWAIT CITY, May 10: Al Ahli Bank of Kuwait (ABK) was named ‘Bank of the Year’ by Arabian Business Magazine, highlighting the Bank’s series of milestones and achievements that have been recorded throughout the past year. Fawzy Al-Thunayan – General Manager Board Affairs, received the award on behalf of the Bank during an awards ceremony held at Jumeirah Messilah Hotel – Kuwait, on May 9, 2017.

The ‘Bank of the Year’ award recognizes ABK’s series of achievements across various areas, substantially in line with its Simpler Banking strategy, growing the Bank’s operations, and demonstrating the Bank’s strength across the region.

In Kuwait, ABK was one of the first to launch biometric fingerprint authentication on its mobile banking system, and ‘Touch ID’ has now replaced mobile banking passwords. The Bank’s Website and Internet Banking have been redesigned with a simpler user experience in mind, and callers to the Contact Centre are now identified by their phone numbers.

The Call Centre platform has been completely replaced, improving efficiencies and reducing call duration by an average of 30%, whilst assigning priority queuing to Elite, VIP, and International callers.

The Bank has also recently refined its e-banking offering to include substantial card enhancements such as payWave for debit, credit and pre-paid cards, which incorporates revolutionary ‘tap and go’ technology, in addition to Verified-by-Visa (VbV) services for debit, credit, and prepaid cards. This helps increase security for customers choosing to use their cards to make purchases online, in addition to several other developments. More importantly, it was the first in the region to introduce a new Quick-Read card, which is designed to make online purchases more straightforward.

ABK also recently launched a new core banking system; a powerful infrastructure framework that has transformed the Bank’s existing IT infrastructure and operating systems entirely. This has already been successfully deployed across its UAE operations and will roll out in Kuwait later this year.

An additional achievement for the Bank was the successful debut issue from its recently established US$1.5 billion Euro Medium-Term Note (EMTN) program. Not only was it the first bond issue for ABK but it was also the first Kuwaiti issuer to launch a bond following Kuwait’s recent successful debut sovereign bond.

In terms of its Egypt operations, the Bank has completed the integration and rebranding across all 39 branches of ‘Piraeus Bank of Egypt’, which have been fully rebranded to Al Ahli Bank of Kuwait – Egypt (ABK-Egypt), along with the integration of the Bank’s systems and management structure. Moreover; ABK – Egypt saw an exceptional turnaround since the acquisition with a substantial growth of 54% in total assets, 73% in loans and 42% in customer deposits in record time.

ABK won a number of prizes throughout the year including: ‘Best Bank Transformation in the Middle East’ Award from Euromoney, ‘Best Commercial Bank in Kuwait’ award  from Banker ME, and CEO Mr. Michel Accad was named ‘Banker of the Year’ by Banker Middle East, ‘Bank CEO of the Year’ by CEO Magazine, an ITP affiliate, ‘Best Retail Bank in Kuwait’ 2017 award from the Asian Banker, ‘Best Retail Bank’ from The European, ‘a Thomson Reuters affiliate’ and most recently ‘Employer of the Year’ by Naseba for the second consecutive year.

For more information about ABK please visit eahli.com or contact an ABK customer service agent via ‘Ahlan Ahli’ at 1899899.