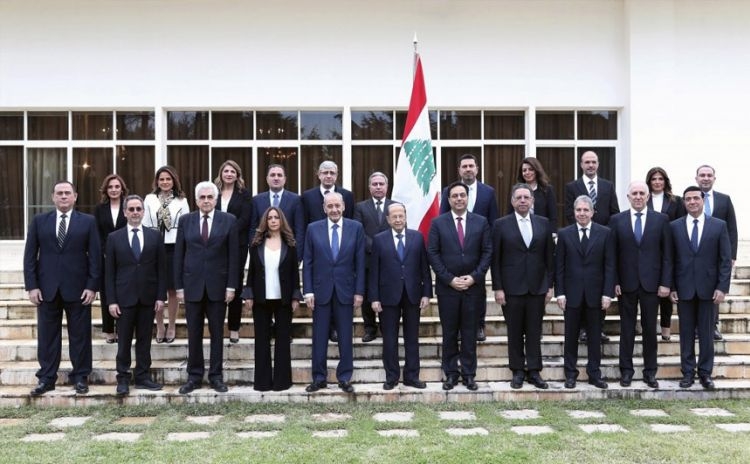 His Highness the Amir Sheikh Sabah Al-Ahmad Al- Jaber Al-Sabah on Wednesday sent cables of congratulations to Lebanese President Michel Aoun and Prime Minister Hassan Diab on forming a new cabinet. His Highness the Amir wished ministers of the newly-formed government success in realising the aspirations of the Lebanese people.

He also expressed good wishes to the president and prime minister, hoping to see progress and prosperity for the Lebanese people and further promotion in bilateral relations between Kuwait and Lebanon. Their Highnesses the Crown Prince and Prime Minister, Sheikh Nawaf Al-Ahmad Al-Jaber Al-Sabah and Sheikh Sabah Khaled Al-Hamad Al-Mubarak Al-Sabah, addressed cables of identical content to the Lebanese president and premier. The announcement of the formation of the new government in Lebanon “is an essential step towards ensuring that the country can address the multiple crises affecting it,” the European Union said Wednesday.

Tackle
“The incoming Lebanese government must swiftly tackle the acute economic challenges and enact structural reforms to respond to the needs and expectations of the Lebanese people. Appropriate protection must be guaranteed to more vulnerable groups of the society,” said Peter Stano, spokesman for EU High Representative Josep Borrell, in a statement. The EU is supporting Lebanon in social and economic reforms, as well as helping to reinforce good governance, accountability, and the fight against corruption, he noted.

He reaffirmed EU’s strong partnership with Lebanon and its people and its continued support for Lebanon’s stability, unity, territorial integrity, sovereignty and political independence. President Aoun said on Wednesday that some of the main tasks of the new government “are to win the Lebanese trust and regain the international community confidence in the Lebanese institutions.” The cabinet secretary general, Mahmoud Makkiah, reading a statement following the new cabinet first session, quoted the president as saying that the new cabinet mission is to win the Lebanese confidence, tackle economic conditions and regain confidence of the international community in the Lebanese institutions. The 20-member cabinet, including five women ministers, was declared, amid ongoing protests demanding administrative reforms. For his part, Hassan Diab, the prime minister, said Lebanese have the right to chant and demand stoppage of the country’s deterioration while reforms “have remained a hostage of polarization.

Disaster
“We are in front of a disaster and we must alleviate its impact on the Lebanese.” “Democracy must be maintained and protected and there must be keenness on democratic expression even if it is against us,” he said, affirming that his cabinet represents all Lebanese. The new cabinet during the session formed a committee to draft its manifesto. The next session will be held on Friday. According to the Lebanese constitution, a new government is obliged to present its platform to the parliament within 30 days after formation. It is not entitled to practice its jurisdictions without the lawmakers’ confidence.

The new government is the third during Aoun’s era that began in October 2016. A new Cabinet was announced in crisis-hit Lebanon late Tuesday, breaking a months-long impasse amid mass protests against the country’s ruling elite and a crippling financial crisis, but demonstrations and violence continued. Hassan Diab, a 60-year-old former professor at the American University of Beirut, announced a cabinet of 20 members – mostly specialists supported by the Shiite group Hezbollah and allied political parties.

The new government, which comes three months after former prime minister Saad Hariri resigned, was rejected by protesters who have been calling for sweeping reforms and a government made up of independent technocrats that can deal with the country’s economic and financial crisis, the worst since the 1975- 90 civil war.