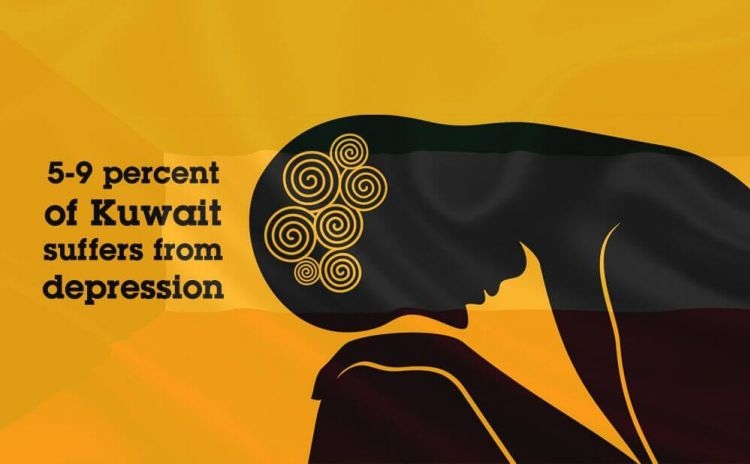 The Ministry of Health reported that five to nine percent of the nationals and foreign residents in Kuwait suffer from depression with the number of those affected by variant degrees of the illness amounting to 1.25 million. The ministry released the figures in a statement as it prepares for marking the World Health Day on April 7, the high point in the World Health Organization (WHO) campaign "Depression: let's talk."

Though depression is the leading cause of suicide, which is, in turn, the second leading cause of death in 15-29-year olds, specialists argue that not all senses of depression can be diagnosed as depressive disorders. There are specific symptoms that determine diagnosing the variant forms of the illness such as anxiety, fear, and manic depression, the ministry noted in the statement that is part of an awareness campaign on the illness. The campaign includes scientific programs, specialized lectures, booklets and messages via the social media websites. It aims to raise the public awareness about the adverse impacts of the illness on family and society, and best treatments as well as the health service providers, notably the Psychological Medicine Hospital. The Hospital cares for 68,740 people who are affected by depression due to stresses of the public life, occupation or physical diseases. In this connection, Dr. Adel Al-Zayed, director of Psychological Medicine Hospital, said many chronic or diseases or accidents can lead to depression or post-traumatic disorders. "The hospital admits nearly 2,000 people with depressive disorders a year," he said in statements to KUNA. "There is a clear distinction between a transient sense of depression which anybody could feel in case of work-related stresses or death of a dear person, and the illness that could affect a person for a long time. "Depending on the number and severity of symptoms, a depressive episode can be categorized as mild, moderate, or severe. A key distinction is also made between depression in people who have or do not have a history of manic episodes.

"Both types of depression can be chronic, lasting for an extended period of time with relapses, especially if they go untreated," Dr. Al-Zayed made clear. Kuwait and many other Arab countries have a high prevalence rate of the illness due to family and social problems, coupled with unjustifiable price hikes and the accelerated use of information technologies including smartphones and social media that made people solitary creatures, he explained. On the WHO vision for depression in 2020, Dr. Al-Zayed said the organization deems the illness the leading cause of ill health and disability worldwide.

"More than 300 million people are now living with depression, an increase of more than 18 percent between 2005 and 2015," he said, citing the latest WHO estimates.
"Lack of support for people with mental disorders, coupled with a fear of stigma, prevent many from accessing the treatment they need to live healthy, productive lives.

"The new estimates have been released in the lead-up to WHO's year-long campaign 'Depression: let's talk.'

"The overall goal of the campaign is that more people with depression, everywhere in the world, both seek and get help, he went on. Dr. Al-Zayed noted that women are more susceptible to depression than men due to hormonal changes but when both genders reach the age of 50 they are equally exposed to the illness. Children under the age of 18 are not safe from the illness, he said, noting that one to two percent of them suffer from variant types of depression, including use of aggressive behavior as a way of self-expression.