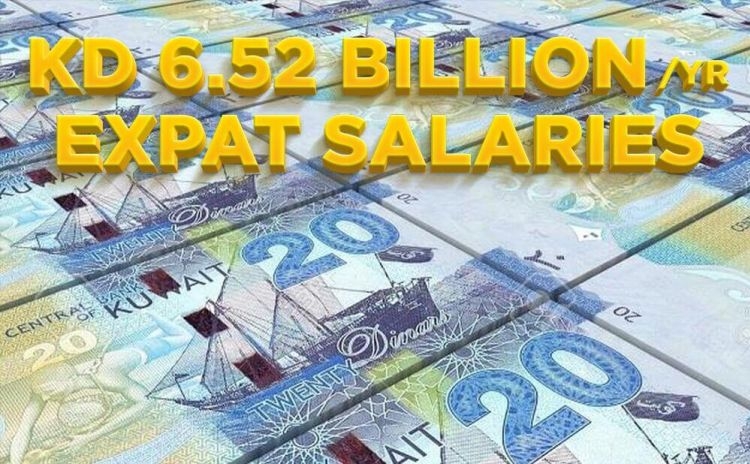 This means the average salary of all expatriate employees of the public and private sectors, excluding domestic workers, is KD 290, and the sum of their salaries will come up to KD 5.66 billion per year. By adding the 613,000 domestic workers who receive an average monthly salary of KD 117, the total sum of salaries offered to all expatriate workers in Kuwait will be KD 6.52 billion.

Considering this, the average monthly salary of an expatriate working in Kuwait is KD 243. There are 19,000 unemployed Kuwaiti citizens and 814,000 non-Kuwaiti residents who cannot work such as students, the elderly and very young children. This increases the total number of expatriates to 3.07 million who receive a total income of KD 6.5 billion per year.

Therefore, the average monthly income is KD 177 per head. Subtracting the total remittances of expatriates, which is more than $15.2 billion or KD 4.6 billion as per the World Bank’s report of 2015, and represents 71 percent of the total income of expatriates, the average expenditure for each person will be KD 51 per month. This represents 29 percent of the per capita income.

Even though domestic workers are not obligated to pay for their basic needs, it is not easy to break down the remittances based on profession. According to the 2014 World Bank report in which the remittances of expatriates in the GCC countries were compared with the national incomes of each GCC country, Kuwait came second with 11.15 percent after Oman, which recorded 12.71 percent of the national income.