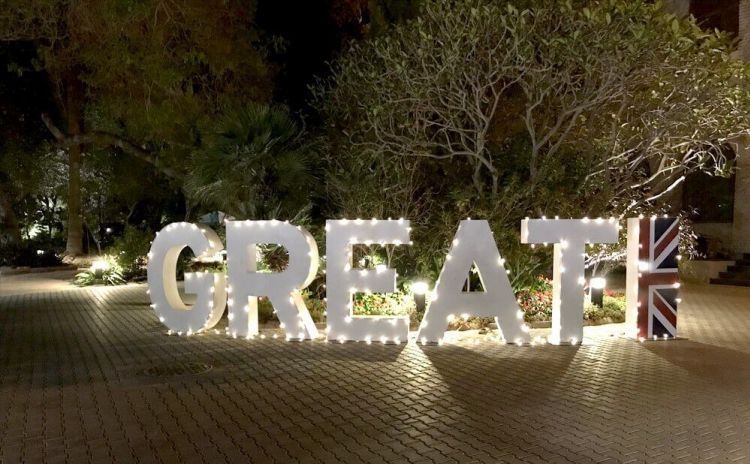 KUWAIT CITY, April 25: In celebration of Her Majesty Queen Elizabeth II’s Birthday, the British Embassy Kuwait held a reception at the Ambassador’s Residence, attended by Guest of Honour Minister of Information and Minister of State for Cabinet Affairs HE Sheikh Mohammed Abdullah Al Mubarak Al Sabah.

More than 650 guests were present at the event attended by current and former MPs, ministers, ambassadors, business leaders, civil society actors, media personalities and representatives from both the British and local community in Kuwait.

Addressing his guests, British Ambassador Matthew Lodge thanked partners and guests for supporting this year’s celebration and said: “This evening’s celebration is to mark the two remarkable and happy milestones of a 91st birthday and Her Majesty’s Sapphire Jubilee year — 65 years on the throne. And not forgetting that Her Majesty is also the Sovereign of Canada, Australia and New Zealand and 12 other realms, stretching from Tuvalu, to Belize and the Solomon Islands. At one point or other during her reign, Her Majesty has been Sovereign of a total of 32 independent countries. So I hope that all of us, wherever we are from, can join in celebrating a life devoted to public service and a monarch who is known across the whole world.”

“When we considered how best we could mark this year’s celebrations, at a time when change seems to come thick and fast and old certainties no longer look so solid, when cries of division frequently seem louder than calls for unity, when we face genuinely global challenges but too often seem to struggle to come up with even local answers, I thought we should celebrate one of the United Kingdom’s particular strengths and defining characteristics — namely our diversity and the identity and culture of each of the four nations that make up the United Kingdom of Great Britain and Northern Ireland. I also wanted us to look forward — to think about the younger generation and their futures. So I am delighted that the garden this evening features displays from Northern Ireland, Scotland, Wales and England.”