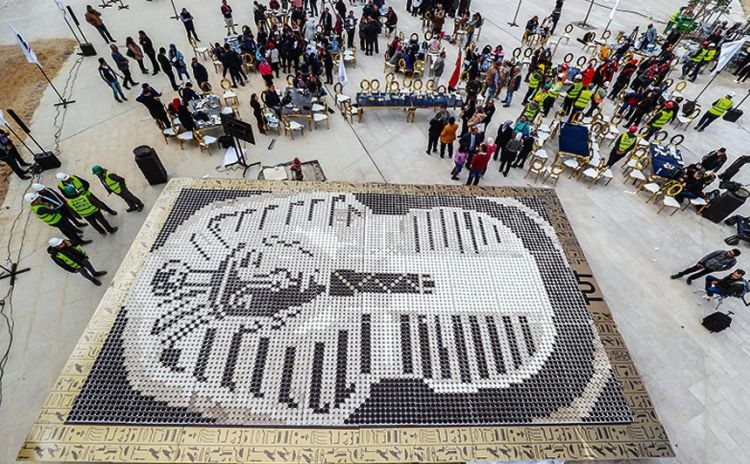 At the yard of the Grand Egyptian Museum (GEM) near the Great Pyramids of Giza, Egypt celebrated on Saturday in an open-air ceremony setting a new Guinness World Record for the largest mosaic of ancient Egyptian King Tutankhamun’s mask made of coffee cups.

“The mosaic of King Tut’s mask is made of 7,260 cups of coffee, which is a plus for the GEM whose opening is awaited by the whole world in late 2020,” Mostafa Waziri, secretary-general of the Supreme Council of Antiquities, told Xinhua during the ceremony.

The mosaic of Egypt’s world-famous boy king’s mask was carried out by a group of Egyptian youth. The area of the mosaic is 60 square meters, beating the 2012 world record set by a similar coffee-cup mosaic in the United States depicting late American singer and actor Elvis Presley’s face, which consisted of 5,642 cups of coffee with a total area of 37.24 square meters. The event was attended by the regional director of Guinness World Records for the Middle East and North Africa, Talal Omar, who said that King Tut’s mosaic sets a new world record in terms of the number of cups and the total area.

“I’m happy to be in Cairo today to witness a new world record of a portrait (mosaic) made of coffee cups. We are happy about the visit, but feeling happier to be briefed about the Grand Egyptian Museum which will house thousands of ancient Egyptian artifacts. Today, the world record depends upon the total area of the coffee cups or the portrait made of the coffee cups, as it should be more than 60 square meters. On behalf of Guinness World Records, I am happy to be here to register a new world record for the largest coffee-cup mosaic at the GEM, a great cultural edifice that is expected next year to be jammed with tourists who would love to explore Egypt’s history and civilization,” Omar told the attendees.

The event was held under the auspices of the Egyptian Ministry of Tourism and Antiquities, which used to be two separate ministries before a recent cabinet reshuffle took place earlier in December. “This is the first event to be held after merging the two ministries and it is an important activity for promoting the GEM. Coffee is a welcome drink in Egypt and the cups of coffee in today’s activity signify welcoming Egyptian and foreign tourists to visit this magnificent building,” said Ghada Shalaby, deputy minister of tourism and antiquities.

The GEM total area is about 500,000 square meters and it will be the world’s largest museum displaying artifacts of one civilization. It is expected to host over 100,000 artifacts, some 3,500 of which belong to King Tut. “Architecturally, about 94.5 percent of the GEM construction is completed, and at least 7,200 square meters of the GEM area will be dedicated to featuring King Tut’s artifacts,” El-Tayeb Abbas, the GEM’s director for archeological affairs, told Xinhua during the event. – Reuters