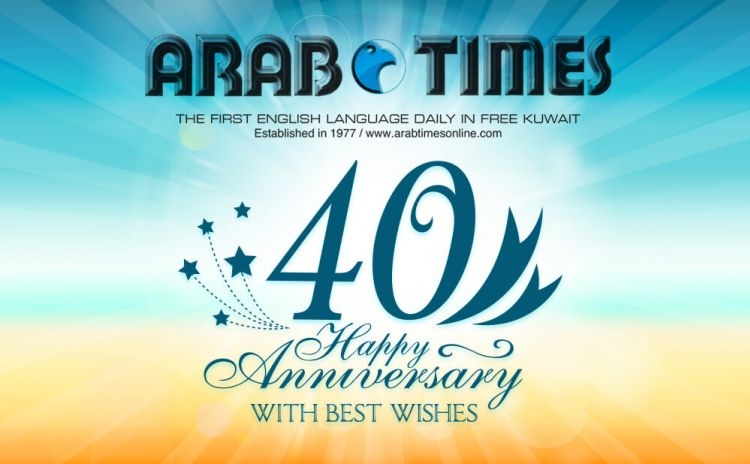 Wishing all the dedicated folk at Arab Times the very best as they celebrate the 40th anniversary of the news daily.

The prospect had arisen in 1965 when Yousef Al- Rafaei, the owner of Al-Seyassah weekly magazine, initiated the chance for Ahmed Al-Jarallah of holding the position of “Editor-in-Chief” in his own magazine. During those days Al Rafaei was performing the role of the “Minister of the State for Cabinet Affairs” and “head of Municipality” of Kuwait. Al Jarallah accepted the offer and started his position as the Editor-in-Chief for Al-Seyassah weekly magazine.

Since 1965 till the end of 1967, with his professionalism, victorious acts and his expanding successful relationships with the local and Arab leaders who were with central key positions at that time he changed the image of  Al-Seyassah weekly magazine to one of the most famous well-known and reputed and most read the magazine.

Due to some perspective problem between Al Jarallah and the Minister Al-Rafaei. The former a journalist was obsessed with the media passion started publishing to the world all kinds of news his eyes could see and all sorts of analysis and thoughts could come to his mind. These problems forced Al Jarallah and Al- Rafaei to no choice but separation, in other words, to take a firm decision of two available choices: either Al-Jarallah leaves the magazine to its owner or he buys it. The second choice was the most probable one for him as journalism is a matter of capability and for Al-Jarallah it was the only career he had for living. And he had what he wanted. In the end of 1967, he requested an application for transferring the weekly patent license of Al-Seyassah into a daily one in a time when” Al- Rai Al -Am” was the only exclusive daily newspaper.

From 1967 and until April 1968 Al-Jarallah turned to prepare for publishing his daily newspaper. On April 8th of the same year, the first edition of the daily Al-Seyassah newspaper with limited capabilities was published. Al-Jarallah lead his newspaper towards the progress and upgrade in its long successful cycle; hence gained the good reputation on the Arab and international levels.

Al-Hadaf was a weekly newspaper published in the Arabic language since 1965 and the newspaper was then settled on top of the other weekly newspapers. This settlement guaranteed a huge demand for the newspaper in the market. The newspaper includes colored plus black and white 32 pages covering different sorts and bunches of issues such as; fashion, interviews, social, economic and political comments, in addition to other pages specialized with feminism issues. The newspaper attracted a huge number of readers in the Gulf region and other countries of the world.