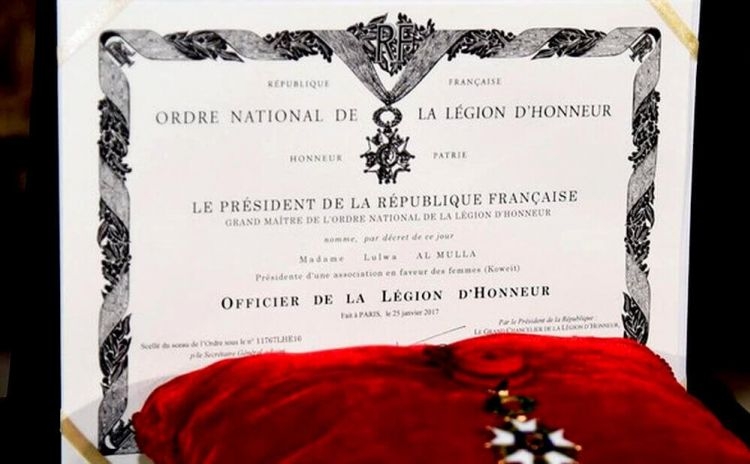 KUWAIT, May 15 (KUNA) -- His Highness the Amir Sheikh Sabah Al-Ahmad Al-Jaber Al-Sabah on Monday sent a congratulatory cable to Lulwa Saleh Al-Mulla on the occasion of having been conferred a French order of civilian distinction.

This honoring came in recognition of her contributions to social and women's issues and human rights.

Lulwa Saleh Al-Mulla, Board Chairman of the Women’s Cultural & Social Society (WCSS), was conferred the highest French civilian distinction - the Knight of the Légion d’Honneur (Legion of Honour) by the French Ambassador to Kuwait H.E. Christian Nakhlé during a ceremony.

Al-Mulla plays a significant role in the WCSS to advance and empower Kuwaiti women through many social initiatives.

The event, held at the Al Mulla Diwaniya on 26 April, was attended by many dignitaries, as well as the family, friends and associates of Al-Mulla.

France presents this award to distinguished individuals who have been instrumental in supporting or spearheading initiatives in the humanitarian and women's rights fields.