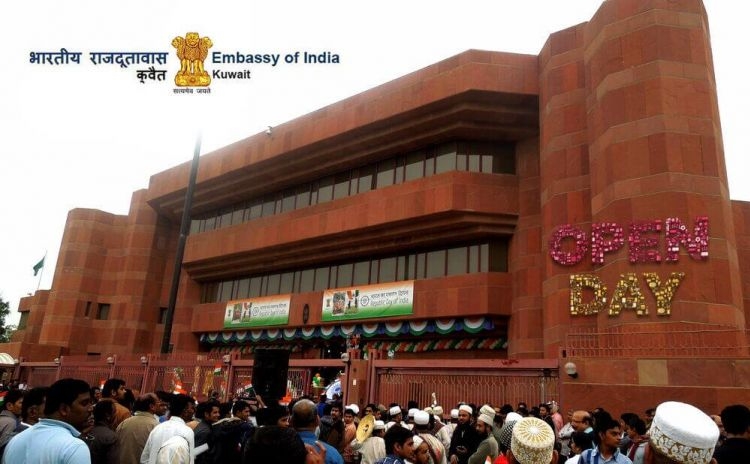 Indian Embassy hosted an open house for the Indian community living in Kuwait to address various issues and concerns faced by the community members. Ambassador HE Sunil Jain welcomed the gathering at Embassy auditorium and introduced Embassy officials dealing with various services at the Embassy.

The ambassador in his opening remarks said that the embassy is addressing various issues such as the non-payment of salaries for Indian workers at Kharafi National and Mushrif Company. He said that various levels of discussions with Ministers and Kuwaiti officials had taken place.

"There is some progress. I am hoping that we will be able to solve the issues completely very soon," he said.

Ambassador also raised his concern over the recent incidents of violence at some of the labor camps where the Indian community members are involved. Some of the Indian workers were deported for taking part in violence and indulging in damaging the properties. We urge the community member not to involve in such act. "This will not only spoil their future but also damage the image of our community as a whole," ambassador said.

The embassy is trying to do our best to help our community, but some issues are beyond embassy's control and will require some time as we have to follow some systems in this country. However, I appeal our community members to send the full detail whatever possible in the first instance itself when you are putting any complaints. This will help us to expedite the issues, he added.

On his part, the First Secretary for Community Affairs and Community welfare wing Sri Krishan Kumar Pahel said that the embassy will attend the death cases of Indian nationals at any time of the day or night. As a solace to our community, the number of death registered by Indian national in Kuwait had reduced last year. While there was a 649 death registered in 2015, the number is reduced to 576 in 2016, he said. The embassy is able to complete the formalities of sending mortal remains of Indians back to India within 2 to 3 days. In the death of Indian nationals in various accidents where compensations can be claimed, Embassy is facilitating such cases through our panel of lawyers. In the year 2016, the embassy could collect around 7 crores Indian rupee as compensation and distributed to their families in India through district collectors in the respective area. "Our officers also visits hospitals and collect details of various Indians and provide necessary assistance," Pahel said.

"We are very grateful to the Indian community and leaders of various associations for highlighting the issues and assisting the needy," Mr. Sibi U.S., Second Secretary for Labour, said.

He also said that some cases which are sub judice or require further clearance from local authorities, we need to understand that it require its own time and embassy have its limitation. The total number of complaints received at the embassy in the year 2017 till April is 1277 which includes domestic workers and others. "We received around 994 complaints from domestic workers and out of that we were able to solve 737 complaints," Mr. Sibi said.

Shri Sanjeev Saklani, who is dealing the Consular section, said that the embassy today issues any passport renewal o the same day, which is the fastest among any other Indian embassies in GCC.

Last year embassy issued 5700 emergency certificates for people who could get their passports for various reasons.

"It is very important to note that once we issue an emergency certificates to an Indian national, their passport will be automatically canceled.

Various issues such as changing the name in a passport, changing the date of birth, Applying for PCC, issues with sponsors, living without residency etc were discussed and the concerned officers answered the questions raised by the audience. Deputy Chief of Mission Sri Subhashish Goldar, Second Secretary Shri Yashwant Chatpalliwar and Shri Anup Singh from Commercial Wing were also present during the open house.

The embassy had already published the names of all officers on its website. The phone number and details of officers are also published on IndiansinKuwait.com. "All the officers are also can be contacted through WhatsApp on the same number, " Ambassador said. However please provide the maximum details while sending any message, he added. The embassy will try to organize such Open houses frequently, ambassador assured.