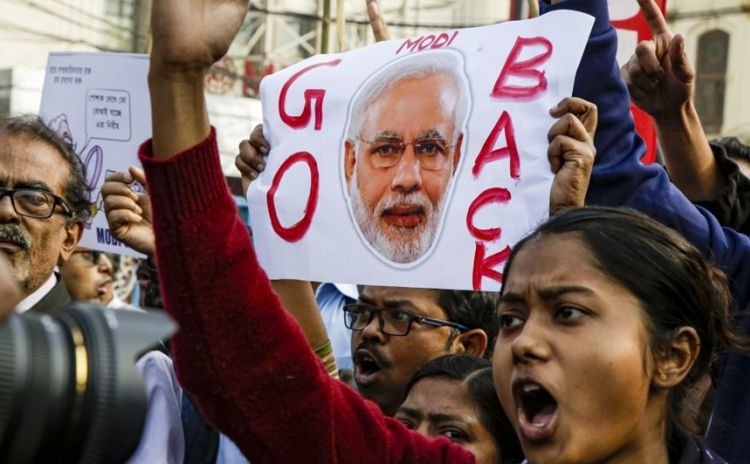 The new citizenship law and a proposed National Register of Citizens have brought thousands of protesters out in the streets in many cities and towns since Parliament approved the measure on Dec. 11, leaving more than 20 dead in clashes between security forces and the protesters. Modi arrived today on a two-day visit to Kolkata. (AP Photo/Bikas Das)

NEW DELHI, Jan 14, (AP): The southern Indian state of Kerala on Tuesday became the first to legally challenge a new citizenship law that has triggered nationwide demonstrations. In a petition to the Supreme Court, the state government said the law violates the secular nature of India’s Constitution, and accused the central government of dividing the nation along communal lines.

The citizenship law backed by Prime Minister Narendra Modi’s Hindu- nationalist party provides a path to naturalization for people from Bangladesh, Afghanistan and Pakistan, unless they’re Muslim. It has triggered nationwide protests and clashes with police, leading to 23 deaths.

The rallies have slowly morphed into much wider anti-government protests. Critics say the law, which was passed by Parliament on Dec 11, will be used in conjunction with a citizenship registry that could require all Indians to produce documents proving their origins, a challenge in a country where many people lack official records including birth certificates.

Kerala, a state ruled by a communist party, has strongly opposed the law and passed a resolution against in early January. The state government criticized the law in front-page advertisements in at least three national newspapers on Jan 10, saying the state is “leading the efforts to protect constitutional values.” Modi’s Bharatiya Janata Party said the move by the state was political.

Pinarayi Vijayan, chief minister of the state, has also written to the heads of 11 other states not ruled by Modi’s party, urging them to unite in their fight against the law. Political challenges for Modi over the law are mounting, setting the stage for a wider confrontation between the federal government and some states that have said they will not implement it. West Bengal state Chief Minister Mamata Banerjee, a staunch Modi critic, has led several rallies in her state against the law. Punjab, Rajasthan and Madhya Pradesh states, which are governed by the opposition Congress party, have also announced they will not implement the legislation.

Rejected
The law has also been rejected in the western state of Maharashtra, where Congress is part of a coalition government. Modi’s government insists that the law is needed to help persecuted non- Muslim minorities from Afghanistan, Bangladesh and Pakistan who came to India before 2015 by giving them Indian citizenship.

The court held that the internet shutdown impacted the freedom of press, which is part of freedom of speech and expression. Ghulam Nabi Azad, a leader of the opposition Congress party, and Anuradha Bhasin, editor of The Kashmir Times, were the main petitioners in the case. The Congress party said the court delivered the “first big jolt of 2020 to illegal activities of Modi’s government by stating the importance of the internet as a fundamental right.”

The people of Kashmir were waiting for this judgement, said Azad. The decision to abolish Kashmir’s special status was accompanied by a extensive lockdown, with New Delhi sending tens of thousands of additional troops to the already heavily militarized region, imposing a sweeping curfew, arresting thousands and cutting virtually all communications.

Authorities have since eased several restrictions, lifted roadblocks and restored landlines and cellphone services. The internet, however, remains cut off. Officials also have encouraged students to return to school and businesses to reopen, but top political leaders from the region continue to be under arrest or detention.