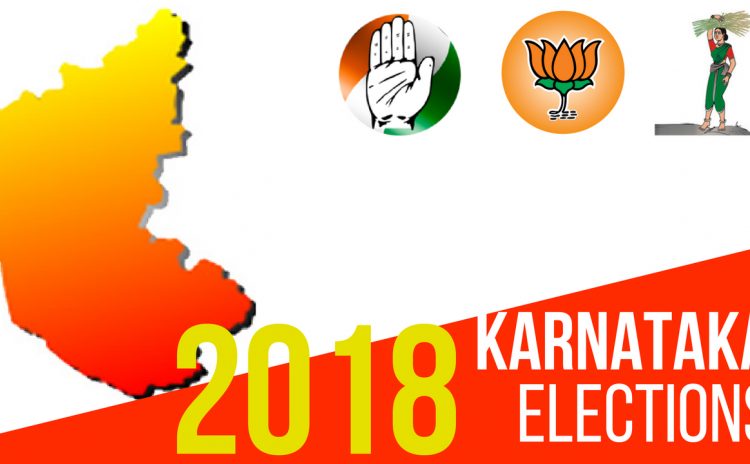 Given the wild misses that characterize exit polls, only a desperate punter would put money on them. No algorithm seems good enough to crack the behavioural pattern of Indian voters. However, while the numbers of a specific pollster may be inaccurate, taken together these polls generally reflect a broad trend. Such a reading would imply that Karnataka is staring at a hung Assembly in the state. It could be a wrong conclusion.

Six of eight pollsters give BJP the edge while three put Congress ahead. Only three agencies predict a clear majority. India Today-Axis My India's upper limit (106-118) gives Congress the simple majority in 224-seat House while Republic TV-Jan ki Baat (95-114) and Today's Chanakya (120) see BJP coming to power on its own. In all these scenarios, Janata Dal-Secular (JD-S) is the power broker in a divided House with around 30 seats.

Exit polls are done by professionals based on data mining, algorithms, calculations and some amount of interpretations. These aren't punts. Even so, it is likely that the bigger picture remains elusive to psephologists and newsrooms just as it did during the Uttar Pradesh Assembly election in 2017. In Uttar Pradesh, no 'wave' was detected. Pollsters, journalists, and opinion-makers foresaw a dogfight between BJP, SP+Congress, and BSP amid complex caste equations, and predicted a hung Assembly. BJP bagged 324 seats.

It wasn't because pollsters and journalists were lax in their job but because their tools were not good enough to pick up the signals. We might witness an encore in Karnataka. That is because Narendra Modi and Amit Shah have transformed the art of winning elections in such a way that political rivals and analysts have been blindsided alike. Congress has not yet been able to crack the code, though in Siddaramaiah they possibly have the strongest candidate to upend BJP's plans of expanding footprint in the south.

The Karnataka chief minister remains supremely confident, even brash, and he operates as a powerful regional satrap independent of, and uninfluenced by the Congress high command. He decides own strategy, banks on personal charisma and has little use of Rahul Gandhi's 'leadership'. If Siddaramaiah returns to power, it will be despite Congress, not because of it.

On Saturday, the day of polling, he called BJP's state president and former chief minister BS Yeddyurappa "mentally disturbed" and claimed that Congress will get 120 seats.

"I was expecting this. The exit poll by India Today is closer to the truth. For 6 months now, I have been saying the same thing. I understand the pulse of the people, so I was confident that Congress will win a majority and come to power," Siddaramaiah said.

The Congress might be tempted to take comfort from the fact that voter turnout, at 70 percent, remained lower than in 2013 which may indicate an absence of anti-incumbency sentiment. This correlation, though, has been contested in recent studies which prove that "increase in voter turnout in India does not signal rise in anti-incumbentsentiment".

Where pollsters and political rivals might be getting it repeatedly wrong is to misunderstand BJP's campaign strategy. It doesn't depend on election cycles. The campaign stage obviously is high on rhetoric and optics where BJP, like any other party, selects candidates, does data mining of the electorate, and accordingly holds election rallies, yatras, and outreach programmes. But the groundwork for each election is laid years in advance and the core campaigning remains patient and understated, but relentless.

Also, the prime minister and his trusted general are in constant search of new ways to identify and categorise the electorate. Weight is obviously placed on traditional metrics such as castes and communities but new metrics such as age and gender get equal attention.

Modi, for instance, has been nurturing two core constituencies throughout the entire tenure of his premiership — women and the youth. This approach is backed by impeccable electoral logic. The number of youth voters (18-25 years of age) has doubled since 2013.

According to Karnataka chief electoral officer Sanjeev Kumar, the draft electoral rolls of 2018 elections (in February) showed the number of young voters at 15.4 lakh, compared to 7.2 lakh voters in 2013, a rise of 113 percent. The number, he had then said, could go up a bit as still there was time for inclusion of names on electoral rolls, according to a report in The Times of India.

Modi has been assiduously courting youth and first-time voters through various outreach schemes. He has tried to make the Swachh Bharat initiative a mass movement and youth participation remains a big part of that plan. He has sought to incentivise participation through a reward mechanism. The entire exercise taps into the enthusiasm of the youth instills a sense of nation-building in them and unfailingly stitches in their minds the leadership abilities of the prime minister.

Similarly, through student-interaction programs such as Pariksha Pe Charcha, youth-centric initiatives, and his fortnightly radio programme Mann Ki Baat (where he takes up various youth-related issues, among others), Modi's constant endeavour has been to stay connected with the youth and open a channel of communication through his digital presence.

The effect is evident. Surveys capture youth's affinity for Modi who is looked upon as a youth icon even though Rahul Gandhi is much younger in age.

Similarly, Modi has also courted women voters through a number of targeted initiatives of which Ujjawala has been most successful. Modi has also highlighted the need for and acted upon building toilets to improve sanitation, health and address the dignity of women. He has also worked to increase maternity leave, battled for the end of triple talaq, and started a scheme to save and educate girl children. These are obviously not mere electoral initiatives but nevertheless serve to build a connect with female voters who may look upon the prime minister as a 'doer'.

While this has been happening, Shah has gone about quietly in his task, strengthening BJP's organisational structure, creating a two-way mechanism through which feedback is encouraged, and passed on to party leadership all through the year based on which policies are made. Shah's communication strategy, once again, is not timed with the election cycle. He focuses on building relationships between voters and party functionaries at the micro level and sustaining those relationships all through the year. This enables the party to listen to the people and address their frustrations and complaints that creates an atmosphere of trust. This is invaluable for a political party.

As the election nears, Shah intensifies the tempo and gives his workers some targets that are to be achieved.

“I appeal to workers, don’t look at the candidate. Just look at the lotus symbol (the party’s symbol) and Modi’s photo,” Shah had said while addressing booth workers in Bantwal in Dakshina Kannada district last February, according to a report in Hindustan Times. “Your duty is not to win the Assembly constituency, it is to win your booth. When many such booths are won, we will win the election,” he was quoted, as saying.

On the polling day, he has another set of instructions, as another Hindustan Times report elaborates. “I want all of you — Shakti Kendra in-charge, booth committee members, page presidents, active members — and your families to vote before 10.30 am on polling day. Finish your own duty by then. And then you spend the rest of the day in mobilising others," Shah had said during the Gujarat elections.

This isn't to say that plans do not run into hitches or failures. But these communication channels make it more likely for BJP to tide over crises and ignore media-driven outrages. These core strategies are also far removed from electoral bombast and unrelated to the election cycle, which is why media radar fails to pick them up. On 15 May, it'll be known to what extent have these been effective.