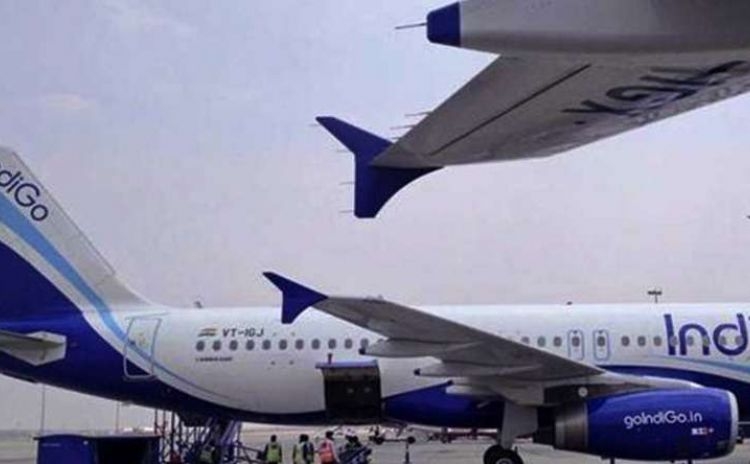 n a freak ground incident, the wing tips of two aircraft -- one reportedly stationary and the other taxiing - collided at Mumbai Airport on Wednesday. This happened when the wings of an incoming Kuwait Airways wide body aircraft and an outbound IndiGo narrow body aircraft clipped before 6 am, much before sunrise when it was still dark.

IndiGo Airbus A-320 (VT-IFP)'s sharklet -portion curved at the tip of aircraft wing — was damaged by the impact. The plane returned to the terminal and had to be grounded. The Directorate General of Civil Aviation (DGCA) is probing this incident.

In a statement, IndiGo said: "IndiGo confirms that the wing tip of its Airbus A-320 aircraft came in contact with the wing tip of the Airbus A-330 - a wide body aircraft of an international operator -- while taxing at the Mumbai airport Wednesday morning. At about 5:45 am, while the aircraft of this international airline was taxing toward the parking stand, at the same time an IndiGo flight (6E 207) was taxing to depart to Jaipur from taxi way 'N' and 'W' respectively.... under air traffic control's (ATC) instruction."

"IndiGo pilot was advised to follow the international operator arrival. Approximately at 5.45 am, the pilot of this international airline was advised by the ATC to move ahead to make way for IndiGo aircraft. As per (rules), while an aircraft is on taxiway N, Taxiway W4 must not be permitted to use as standard wingtip clearance is not met. The (rule) guidelines manual reads - the aircraft holding on taxiway W4 at holding position runway 14/32 will prohibit aircraft taxing on taxiway N. Hence, due to the taxing process, the Airbus 320 aircraft of IndiGo came in contact with Airbus A330 aircraft of the international operator," IndiGo said.

Kuwait Airways' spokesman Andrew Chupeau said in a mail: "As the Kuwait Airways A-330 was in a holding/stationary position when the incident took place, the IndiGo A-320 came into contact with the Kuwait Airways A-330.... Kuwait Airways can confirm that no passengers were at risk; however, it is understood that the wingtip of an A-320 aircraft scratched Kuwait Airways' A-330 (9K-APA) left outboard flap. Kuwait Airways is cooperating fully with both the Indian civil aviation authorities and Kuwait's DGCA, in order to investigate this incident, and further details will be issued as soon as more information becomes available." The flight, KU 301, had flown into Mumbai from Kuwait City.

After wings clipped, IndiGo spokesman said that one of its passengers saw the same and "immediately alerted the crew, who informed the pilots about this. The highly experienced pilot-in-command operating 6E 207 immediately decided to take precautionary measure and returned the aircraft to the parking bay. The flight crew ensured to keep all passengers informed about the situation and assured to maintain calm on board. All passengers were safely accommodated to the other aircraft."

A passenger on board the IndiGo flight said: "IndiGo handled the incident well and there was no panic in the flight. The aircraft wing got dented while moving towards runway. Once a person on board saw this and reported to the airline staff, the plane went back to the terminal and everyone was sent in another aircraft arranged for by IndiGo."