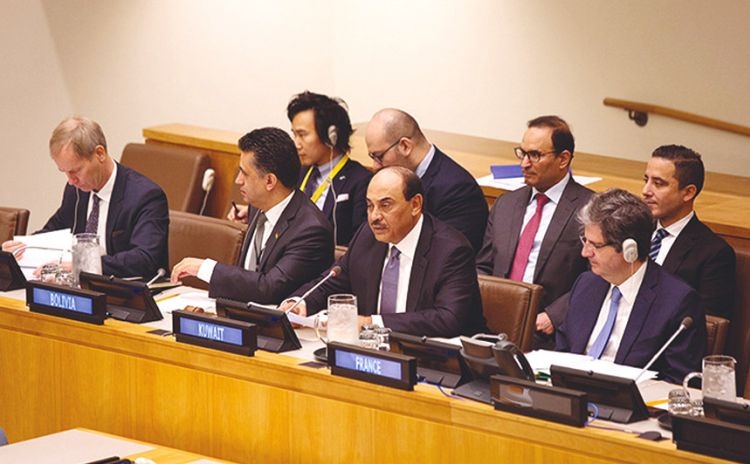 The end of this year marks the end of this journey at the Security Council, but Kuwait will continue its role in the United Nations and its different institutions. Through its non-permanent membership in the Security Council, Kuwait succeeded in enforcing its distinguished diplomatic mark and present solutions to many complex issues facing the world, and coordinate with member countries to suggest and adopt many important projects, resolutions and statements.

On January 1, 2018, Kuwait began its membership at the Security Council as a non-permanent member, succeeding Egypt, to represent Arab countries. Although it was faced by many challenges, Kuwait tackled some of the most important global challenges, most significantly maintaining peace and security, and improving work methods at the Security Council. On that historical day, Kuwait returned to that seat 40 years after its first membership in 1973. Kuwait, earing trust of the international community for a non-permanent seat in the Security Council, received support of 188 out of 198 members and gave the Gulf Nation a two-year mandate.

Before commencing its activities at the Security Council, then Deputy Prime Minister and Minister of Foreign Affairs Sheikh Sabah Khaled Al-Hamad Al-Sabah asserted Kuwait’s keenness on continuing its moderate and balanced approach in seeking to achieve preventive diplomacy. He added that Kuwait would cooperate with member countries to prevent disputes and wars, in addition to solve conflicts peacefully. Sheikh Sabah Al-Khaled added, “We represent our Arab brothers, the Asian group, the Organization of Islamic Cooperation and Asia-Pacific countries. We will work on looking into all that is related to our Arab causes and the challenges facing our Arab and Islamic nations.”

During its tenure on the UNSC, Kuwait presented a number of draft resolutions concerning significant global issues, and released statements on many vital issues in Arab and Islamic countries. In February 2018, Kuwait assumed presidency of the UNSC. During that month many important sessions were held and discussed three main issues: Palestine, Iraq and the purposes of the United Nations Charter in maintaining international peace and security.

On February 21, Sheikh Sabah Al-Khaled chaired a UNSC session at the request of Kuwait about “the principles and purposes of the United Nations Charter in Maintaining International Peace and Security.” Member countries discussed methods to improve the UNSC working mechanisms to limit risks and threats facing the international community. During the session member states reiterated their commitments to the principles of United Nations Charter in light of the increasing challenges facing the international community, and the best means to employ the tools provided by the charter to enable the UNSC to carry on it mission effectively.

The following day, The UNSC discussed Kuwait’s request to hold a special session to discuss the best means to revive the peace process in the Middle East in light of regional and international initiatives approved by the Council. Sheikh Sabah Al-Khaled chaired the session which aimed to provide a clear path to reach a solution to the Palestinian cause which would grant Palestinians the right to establish an independent state with East Jerusalem as its capital by implementing relevant international resolutions and the Arab peace initiative.

On October 30, 2018, Kuwait and Sweden, as the penholders of the Syrian Humanitarian file at the UNSC, called on all concerned parties to facilitate the delivery of humanitarian aid to ‘Rukban’ area on Syrian-Jordanian border, and to respond to UN demands and UN Office for the Coordination of Humanitarian Affairs. Kuwait and Sweden also expressed deep concern over the horrible situation in Rukban, where more than 45,000 people are suffering acute shortages of food, humanitarian and medical supplies.

On December 13, 2018, the UNSC held a vote on a draft resolution presented by Kuwait and Sweden asserting the need to ensure that humanitarian assistance reach Syrians in need, specifically cross-border aid through four crossings in order to alleviate the suffering of the Syrian people. After gaining UNSC’s approval, the Permanent Representative of Kuwait to the UN Ambassador Mansour Al-Otaibi said that the resolution is a success for Kuwaiti diplomacy and is a continuation of the humanitarian work by the country’s leadership, which focus on improving the humanitarian situation in Syria.

On March 15, 2019, the UNSC approved a statement presented by Kuwait and Indonesia condemning in the strongest terms the attacks on two mosques in Christchurch, New Zealand, which killed and injured dozens of civilians. The statement affirmed that terrorism in all its forms and manifestations constitutes one of the most serious threats to international peace and security. On May 31, 2019, Kuwait chaired the UNSC for the month of June, for the third time in its history.

The first was in February 1979 during its first non-permanent seat term at the UNSC, and the second was on February 2018 during its current tenure. In that occasion, Ambassador Otaibi stated that chairing the UNSC is considered a historical moment for Kuwaiti diplomacy whose foreign policy is based on balance and moderation, respecting principles of the UN Charter and international laws, and seeks to actively contribute to maintain international peace and security.

On June 11, the UNSC unanimously adopted a Kuwaiti draft resolution on missing persons in armed conflicts. It aims to support and promote frameworks to protect civilians in armed conflicts. That resolution is the only one that Kuwait presented solely, and it reflects Kuwait’s continuous effort to shed light on humanitarian issues. Furthermore, Kuwait-sponsored resolution stems from its bitter experience during the Iraqi Invasion of Kuwait in 1990 which resulted in a large number of missing Kuwaitis with their fates still unknown.

On June 13, 2019, Kuwait released a presidential statement of the UNSC on the cooperation between the council and the Arab League during a session chaired by Sheikh Sabah Al-Khaled, which included representatives of both bodies to discuss “Cooperation between the United Nations, Regional Organizations and Sub-regional Organization in Maintaining International Peace and Security.” The session was included in Kuwait’s agenda as president of the UNSC for the month of June.

Among the participants are the United Nations Security General Antonio Guterres and the Arab League Secretary General Ahmad Abul Gheit. The statement affirmed that the UNSC is responsible for maintaining international peace and security, and that resolutions and presidential statements which assert the need for establishing an effective partnership between the UN and regional organizations according to the UN Charter and relevant regulations applied in regional and Sub regional organizations.

On August 20, 2019, Ambassador Otaibi submitted a letter to the UNSC regarding Kuwait constructing a platform in Fisht Al-Eij. It affirmed that the platform is being constructed within Kuwait’s territorial waters, thus was part of Kuwait’s practicing of its sovereignty over its territories, and it is being constructed to monitor and follow-up ships movement in Khor Abdullah. On August 29, 2019, Ambassador Otaibi announced that the penholders of the Syrian humanitarian file at the UNSC, which are Kuwait, Belgium and Germany, presented a draft resolution to the UNSC on Idlib, which aims to put an end to the deteriorating human conditions in the Syrian city.

The UNSC discussed the draft resolution on September 29, however it failed to adopt it due to Russian and China’s veto. In response, Ambassador Otaibi expressed disappointment of the UNSC’s failure in living up to its responsibility, noting that “The stance of each UNSC member towards this balanced humanitarian draft presented by Kuwait, Belgium and Germany will go down in history.”

He added that “the draft was meant to protect civilians in Idlib.” The UNSC consists of 15 member states, 10 elected for two-year terms, while the five permanent member states-US, Britain, France, China and Russia-enjoy veto right. The United Nations Security Council is an entity of the six principal bodies of United Nations. These bodies are: UN Secretariat, the General Assembly, Trusteeship Council, International Court of Justice (ICJ) and Economic and Social Council (ECOSOC).