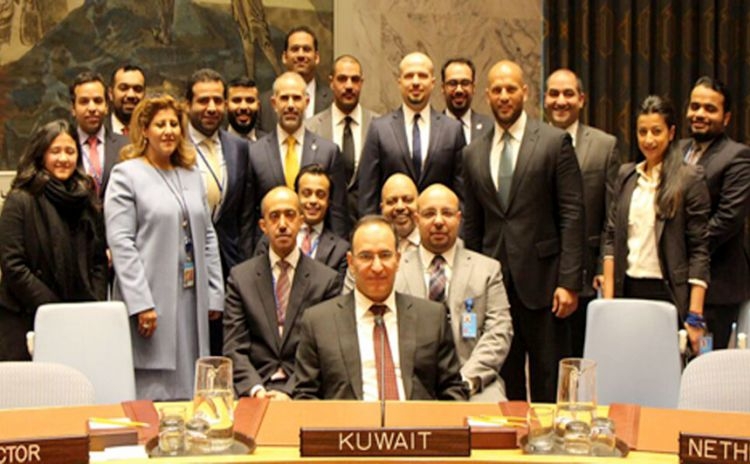 The State of Kuwait concluded its non-permanent membership of the UN Security Council with great success, defending during its tenure, a multitude of Arab-related causes connected with Palestine, Syria and Yemen.

Moreover, Kuwait helped in formulating a resolution -- the first of its kind -- on missing persons in armed conflicts. The GCC state also had a hand in UNSC decisions on the humanitarian situation within context of the Syrian crisis and also contributed to a presidential statement on Yemen.

During the past two years, Kuwait managed to bear the great burden of being the Arab member of the Council and succeeded in following up and coordinating with the Arab countries and trying to reflect its positions and concerns in the decisions or statements discussed by the Council.

"Unfortunately, the Arab issues are many in the Security Council, and some of them have gone on for many years, such as the Palestinian cause. There are other issues listed since the seventies and since 2011... The situation has been very difficult and according to the statistics of the council, the Arab causes in which the council is occupied constitute almost 50 percent of its overall work," Kuwait Permanent Representative to the UN headquarters in New York Ambassador Mansour Al-Otaibi told KUNA.

Kuwait contributed to work in issues pertaining to Arab countries, as task requiring permanent coordination at different levels with Arab missions in New York, he added.

Regarding the opinion of the Arabs on the performance of Kuwait in the council, he said, "I think there is satisfaction and praise for the role of Kuwait and its continuous coordination and work in a transparent manner with all members of the Arab countries." Al-Otaibi noted that it is a very useful experience in the history of Kuwaiti diplomacy, because Kuwait is a small country that does not have a hidden agenda in any of the topics of the Security Council and the issues that concern us primarily to those of the Arab countries.

He pointed out that the foundations and principles of Kuwaiti foreign policy are the same stipulated in the UN Charter and are based on non-interference in internal affairs of the countries, resolving disputes by peaceful means and respecting the sovereignty of states.

He added that Kuwait succeeded with Sweden in adopting the first two resolutions in 2018 and bearing No. 2401 and calling for a cease-fire in all regions of Syria and allowing unimpeded access of humanitarian aid and demanding respect for the obligations of international humanitarian law and international human rights law and not targeting civilians or civil facilities and infrastructure.

"In December 2018, we managed with Sweden to issue a decision to renew the mechanism for entering humanitarian aid through crossing points specified by the decision with Turkey, Jordan and Iraq, a mechanism that contributed to saving the lives of millions of Syrians who depend on this aid that comes through the border crossings," Al-Otaibi stated.

On the Palestinian issue, Al-Otaibi stressed that it is the first Arab case, and there are stable Arab positions, starting from the issue and at different levels such as the Arab League Ministerial Council or at the level of the summit and Kuwait.

Regarding the Yemeni crisis, Al-Otaibi said, "The history of Kuwait's mediation and its attempt to resolve the Yemeni differences is very old. There were previous mediations and our relations with Yemen are historic. When the current crisis erupted with the Houthi coup against the legitimate government, Kuwait had principled positions and joined the coalition to restore legitimacy and mediation efforts were before we entered the council in 2016." He noted that during the recent Stockholm negotiations, Kuwait facilitated the process of transferring Houthi negotiators from Sanaa to Stockholm and through membership in the council, Kuwait supported the UN efforts, implemented relevant Security Council resolutions, and always confirms in all its statements that a military solution in Yemen must be resolved peacefully from during negotiations.

On the relationship of the Security Council with the League of Arab States, Al-Otaibi said, "We have been keen to improve this relationship according to agreements to be signed between the two organizations in the field of maintaining international peace and security." Regarding the Kuwaiti prisoners and missing persons in Iraq, he affirmed Iraq has not fulfilled its full obligations, adding that the Iraqi authorities are fully cooperating with the UN organizations in resolving this case.

On the Rohingya minority issue, Al-Otaibi said that Kuwait succeeded in organizing a visit to Bangladesh and Myanmar with the aim of highlighting the plight of Rohingya refugees living in miserable conditions.

During the visit, Kuwait tried -- in coordination with Britain and Peru -- to push for an organized plan to return the Rohingya to the Rakhine State home state.

"I had meetings with His Highness the Amir during my visit to Kuwait," said Al-Otaibi, adding, "He always praises the performance of the delegation." "During these short meetings, there were directives that we cherish and take seriously and we implement from the standpoint of our national issues or our Arab issues sometimes and there were direct directions as these combined things facilitated our work," indicated Al-Otaibi.

Meanwhile, Deputy Permanent Representative of Germany at the UN headquarters in New York Jurgen Schulz affirmed that he and colleagues were pleased with Kuwait's performance during its tenure at the UNSC, saying that along with Belgian delegation, Kuwait and Germany managed to coordinate on issues connected with the Syrian humanitarian crisis.

Working with peers from Kuwait, Germany and other members had benefited from the Gulf nation's experience in handling the Syrian humanitarian file, he added.

On her part, the Middle East Affairs official at the Belgium Mission to the UN, Second Secretary Florinda Baleci, told KUNA that working with Kuwait within the frame of the Syrian humanitarian file was excellent.

The Kuwaiti delegation demonstrated merit, efficiency and high professionalism that contributed to achieving what was presented in this file on alleviating the human suffering of the Syrian people, she affirmed