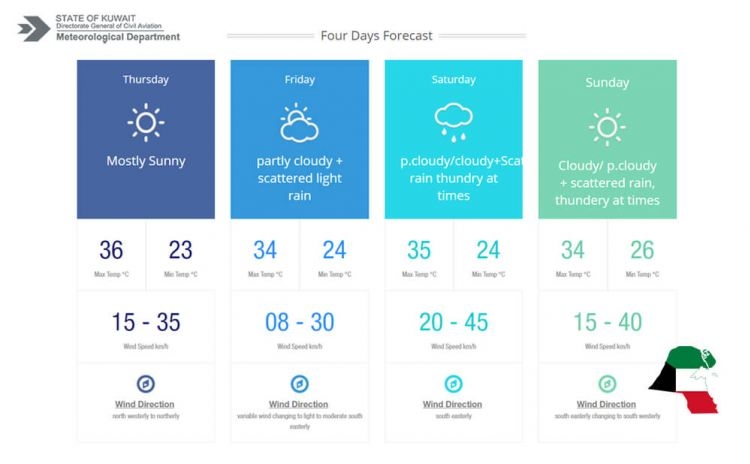 KUWAIT, April 26: The country is forecast to witness partial clouds and scattered rain today and in the coming days, said the Weather Monitor at Kuwait Meteorological Department Abdulaziz Al-Qarawi on Wednesday.

He said in a statement to KUNA that Kuwait would be affected by light to moderate high pressure accompanied by northwesterly and northeasterly winds, expected to pick up occasionally spewing dust in uninhabited regions, also with predicted scattered rain.

The Weather tonight will be partially cloudy, with light to medium northwesterly winds that pick up occasionally (15-40 km/h), with chances of light and scattered rain. As to temperature, it will be in the range of 23-26 degrees. Waves of the sea will be light to medium, ranging from two to six feet.

Such weather persists on Thursday, with the winds ranging between six to 26 km/h, along with forecast intermittent rain. The heat will stand at 23-25 degrees, with light to medium waves at the sea (1-3 feet).

On Friday and Saturday, conditions will be largely similar with the heat ranging between 22 to 24 degrees. (end) mf.rk