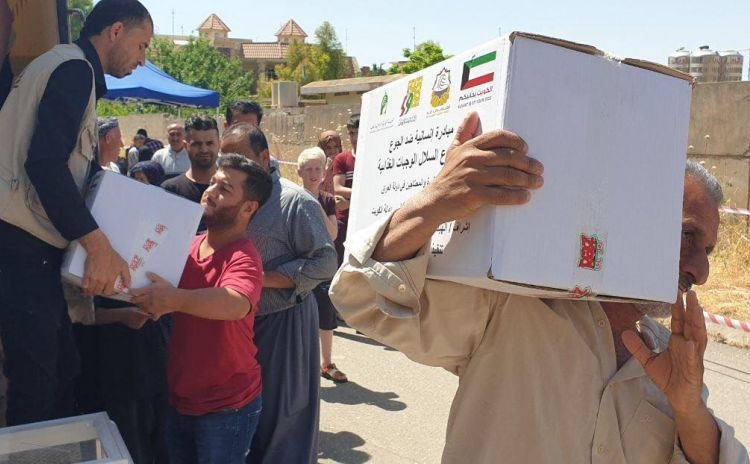 Kuwaiti institutions and organizations have continued to locally and internationally provide relief assistance to refugees, displaced people and the needy during Eid Al-Fitr.

Kuwaiti institutions and organizations have continued to locally and internationally provide relief assistance to refugees, displaced people and the needy during Eid Al-Fitr.

The help Kuwait provided for health and education during the week ended on Friday in Jordan, Iraq and the Gaza Strip.

It was signed by KFAED's Director-General Abdulwahab Al-Bader, and the Jordanian side, the Chairperson of the Board of Trustees of KHCC, Princess Ghida Talal, in the presence of Kuwaiti Ambassador to Jordan Aziz Al-Deihani and senior officials of KFAED.

Al-Bader told KUNA after the ceremony at the KHCC in Amman that the total in collaboration with the Center amounts to USD five million.

The current grant is part of Kuwait's commitments to support the Syrian refugees announced at the fourth International Donors Conference, he explained.

KFAED provided three prior grants to the KHCC for humanitarian assistance to Syrian refugees; the first grant was signed in 2016 with a value of USD one million, the second and the third signed in 2017 and 2018 with the same value each, he said.

The grant agreement aims to fund the costs of diagnosing the patient through laboratory tests, chemotherapy, bone marrow transplantation, and surgeries, Al-Bader said.

On her part, Princess Ghaida Talal thanked KUNA for the support to the KFAED and spreading KHCC's message.

KHCC treats patients from all over the world, providing the best and latest treatments according to international standards, recently placed on the top ranks in developing countries and sixth globally in terms of specialization in cancer treatment, she said.

Chairperson of International Islamic Charitable Organization (ICCO) Heba Adwan said in a statement that the project targeted about 1500 people with special needs suffering from various disabilities.

The aid included vehicles for disabled people, medical devices, as well as providing medical care through a mobile medical clinic.

The project comes in the context of the eagerness of the Secretary-General of Awqaf and Zakat House in Kuwait to alleviate the burden of Palestinian citizens from the Israeli siege and harsh economic conditions, coming at a time when various institutions are unsupportive, she added.

Adwan underlined that the implementation of the project reflects the Islamic and national responsibility of aiding and thanked Kuwait, the Amir and the government.

Then in Iraq, Kuwait's Consul-General in Erbil Omar Al-Kanderi supervised the distribution of 15 tons of foodstuffs provided by the Secretary-General of Awqaf and the International Islamic Charitable Organization (IICO) in Kuwait to the disabled.

Speaking to KUNA, Al-Kanderi said that this aid comes within the framework of the Kuwaiti campaign launched by His Highness the Amir Sheikh Sabah Al-Ahmad Al-Jaber Al-Sabah to alleviate the suffering of Iraqis.

Various assistance provided by Kuwait to Iraqis will continue and vary to include all segments of society, he pointed out.

In a similar statement to KUNA, Omar Talal is thankful for Kuwait's humanitarian organizations, pointing out that 576 food baskets were distributed to people with special needs in Erbil.

At the start of Ramadan, over 10 thousand meals were given to the needy, workers and students in the Kurdistan region.

This was given by IICO who distributed food baskets to displaced Iraqis from camps, totaling to aiding 3,507 families of Nineveh that has a population of 17,300.

KRCS Chairman Dr. Hilal Al-Sayer said in a statement to KUNA that the aim of the donation is to encourage students to participate in voluntary charitable work, thankful of the leadership responsibility students took such as Hussa Al-Kharafi.

Al-Kharafi said that BBS places education as a social priority because it is the foundation for the development and building of societies, adding that the project aims to raise a knowledgeable generation.

The student is glad that BBS is donating, recalling the school's success last year in donation, encouraging those wishing to donate to take this step.

Contextually, the KRCS collaborated with Avenues to continue the campaign to provide nurseries for newborns in Yemen, ending on June 16.

Speaking to KUNA, the KRCS Secretary-General Maha Al-Barjas said that the donation campaign was welcomed by Kuwaitis and many donated to support the children in Yemen.

Despite the availability of screening, diagnosis and maternity programs by health authorities in Yemen, early births of undeveloped children are still a huge issue.

This could hinder the delivery of reproductive health services and supplies, hazardously affecting mothers and their children, the UN Population Fund (UNFPA) said.

Avenues allocated two cash donation machines in the Grand Plaza area, as well as an electronic payment link,  to facilitate the donation process, underlining that it gets sent to the special account of KRCS, Al-Barjas pointed out.