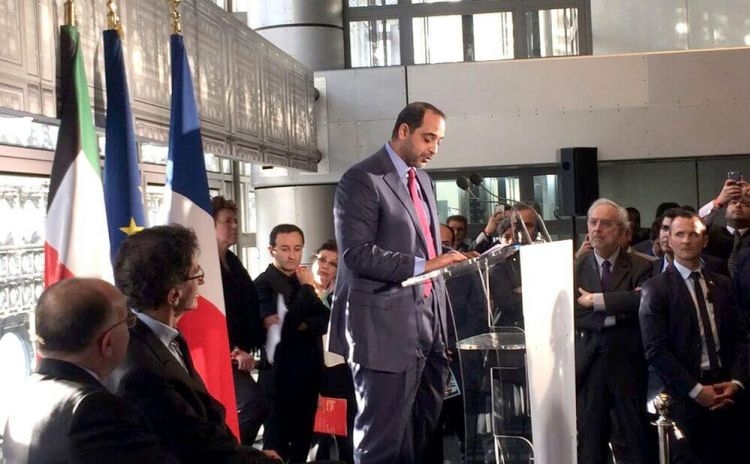 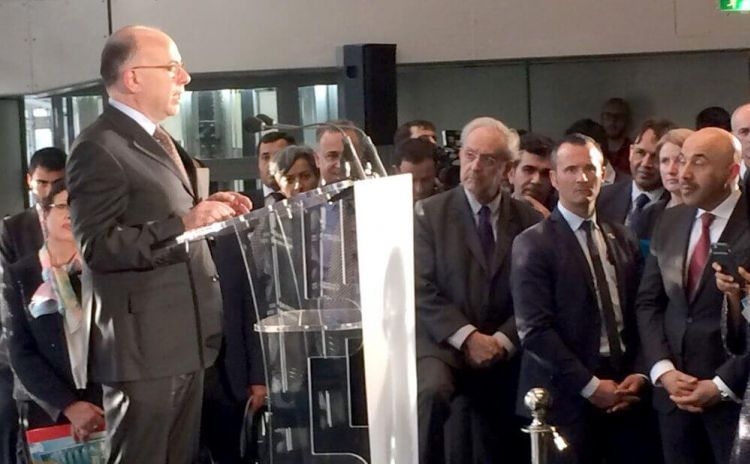 PARIS: France on Thursday gave lavish praise to Kuwait's role in supporting cultural development down through the decades and on several levels and particularly on this occasion by helping refurbish the library in the Arab World Institute (IMA) here in the French capital.

The inauguration ceremony for the new library was co-hosted by Kuwaiti Minister for Diwan Affairs and Acting Information Minister Sheikh Mohammad Mubarak Al-Sabah and by French Prime Minister Bernard Cazeneuve. The inauguration was also overseen by IMA President Jack Lang and the Institute's Director-General Mojeb Al-Zahrani.

Cazeneuve stated that it was "thanks to the generosity of the State of Kuwait" the IMA library was refitted and underwent an ambitious refurbishment "I want to tell you how much the investment of your country in the achievement of this library attests also to the quality of our bilateral relations and to the strength of the ties that have been forged over the years," the French Prime Minister told Sheikh Mohammad.

Cazeneuve added that Kuwait's actions in the culture domain would help build bridges between peoples and cultures at a time when some are seeking to erect barriers between nations and populations.

French officials, including Cazeneuve and also IMA President Lang recalled the long tradition of generosity and support that Kuwait has demonstrated in many areas, including in the recent drive to protect cultural heritage and artifacts in conflict zones, several of them in the Middle East.

"I want here to thank the Amir of Kuwait for his commitment made during the donor conference for endangered cultural heritage last March 20 in Paris, boosting by USD 5.0 million the funds in the International Alliance to protect cultural heritage in conflict zones," Cazeneuve said.

In addition to this donation, Kuwait also provided Euros 2.0 for the library project at IMA and has consistently supported this entity.

In recent comments to KUNA, IMA President Jack Lang cited Kuwait as one of the reliable and erstwhile supporters of the Institute, saying "Kuwait always comes with its payments and is always there for IMA." Kuwait has in the past provided millions of Euros in support for both the IMA itself and individual projects like the renovation of the museum, and now for the library project.

Initially speaking in French, Sheikh Mohammad expressed great satisfaction that the library project had been successfully completed and would open to the public on March 31.

"This great event is worthy of the interest that the French government and the Arab World Institute is according to it today in Paris," he said.

"We are proud that the Arab World Institute Library in Paris is being honoured by this cultural and intellectual celebration because of the great importance it holds at a time when the Arab world is witnessing previously unseen political, cultural and intellectual changes or technical, digital evolutions come one after the other and are imposing themselves in different sectors of modern life," the Kuwaiti official remarked.

He said IMA and its library had "an undeniable role" in the Franco-Arab cultural mission set out by IMA.

This "symbolizes the historical ties that bind our two nations, our two languages and our two civilizations with all of their richness, their diversity and their mutual desire to perpetuate dialogue between them so that justice, tolerance, and peace can reign," he affirmed.

For this reason, Sheikh Mohammad said, "Kuwait wants to play a preponderant role in the Arab World Institute in order to spread Arab culture in all its neutrality and cultural objectivity, which is something the Arab world and its interlocutors in the world very badly need." He further added that the State of Kuwait, in line with recommendations from His Highness the Amir, Sheikh Sabah Al-Ahmad Al-Jaber Al-Sabah, is working for "the spread of culture in the entire world" as demonstrated by its undertaking to build the most modern cultural centres and in making financial contributions in the most important and influential cultural centres on an international level.

He said that Kuwait, which was Islamic Cultural Capital in 2016, sought to promote the blossoming of culture but also to encourage "the fusion of modern and pioneer Islamic culture with other cultures of the world." For his part, IMA President Jack Lang reiterated his great gratitude for Kuwait's unfailing support for the Arab World Institute and its projects.

"Kuwait is a country that is especially dear to us," he said in his comments at the inauguration.

"The links between France and this country are links that are deep, age-old, close and lasting and have been expressed at many different times, some happy, some terrible" he indicated.

He recalled the "terrible" period of the 1990 invasion of Kuwait by Iraq and noted: "I was part of the government at that time and we were totally in solidarity with Kuwait in the face of the aggression of which it was a victim." Lang said that the cultural ties between IMA and Kuwait were multiplying, and Kuwait was now a country that is "springing up, intellectually and creative," and he lauded Kuwait's hosting of the Islamic Culture Year, which he said was successful Kuwait undertook the creation of events as well as welcoming visiting creations.

He again thanked Kuwait for its support for culture, worldwide.

"The President of the Republic and the Prime Minister were very touched by the commitment of The Amir of Kuwait when the international foundation for safekeeping of cultural heritage in conflict zones was established on March 20.

He praised the "material and moral" contribution to this cause and Kuwait's prominent stance.

He also highlighted the various other areas in which Kuwait has contributed both financially and in other ways, notably now with the completion of the IMA library project.