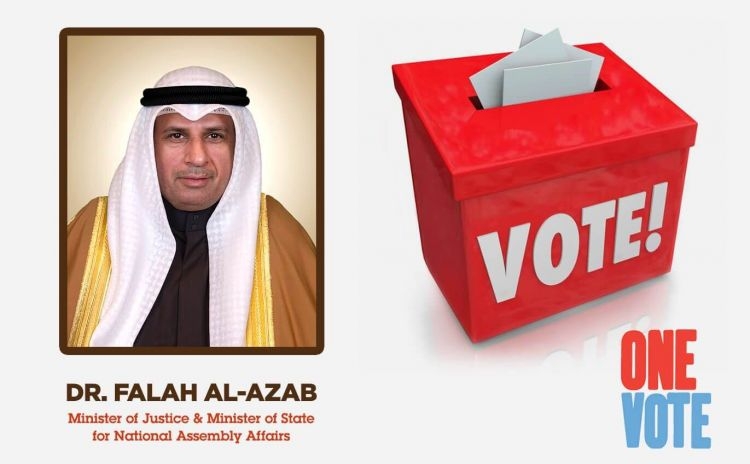 Minister of Justice and Minister of State for National Assembly Affairs Dr. Falah Al-Azab said on Tuesday that the “government is holding on to the one-vote electoral system and a law prohibiting convicts from running for elections.” The Minister of Justice’s statement came in response to a question posed by the press over a suggestion to amend electoral laws in a way that would allow the electorate to vote for two candidates instead of one. “The single-vote system, implemented by virtue of an Amiri decree, will remain in place,” he said.

On a law barring convicts from standing elections, Al-Azab said that “constitutional laws dealing with decorum should never be violated.” The National Assembly has recently rectified electoral laws to “prohibit convicts from running for elections.” His Highness the Amir has instructed the government to have the nation’s best interests at heart as it sorts out the issue of Kuwaiti citizenship, Kuwait’s Minister of Justice said on Tuesday.

In a statement to the press after a parliamentary session, Al-Azab, who is also Minister of State for National Assembly Affairs, said that His Highness the Amir firmly believes in abiding by the constitution and state laws. Moreover, he noted that the National Assembly has formed an ad hoc committee to deal with the citizenship issue. “The government has some pointers regarding some suggestions MPs have made related to the citizenship issue, “Al-Azab said. The Minister of Justice also underscored that the government is eager to work with Parliament to solve a number of issues, while adhering to constitutional dictates.

National Assembly Speaker Marzouq Al-Ghanim said on Monday that His Highness the Amir has tasked him and His Highness the Prime Minister to get to the bottom of the citizenship issue. The National Assembly, in its regular session Tuesday, approved the request of several MPs to form a five-member committee which will investigate the alleged anomalies in a number of departments at the Ministry of Health; including the financial and administrative irregularities in the health offices in Germany, America, Britain and France.

This is in addition to 151 allocations granted to the Patients Helping Fund contrary to instructions of the State Audit Bureau, as well as corruption in overseas treatment and irregularities in nurses’ contracts. The committee will also look into the level of compliance with rules and regulations on the appointment of former and current heads of health offices, financial auditors and administrators; stages of awarding Afia insurance contract for retirees; legal and health procedures in designing and constructing the new Adan Hospital; and to know if it is true that the design of the new hospital changed but the cost remained the same.

The Assembly then elected the committee members as follows: MPs Omar Al-Tabtabaei, Salah Khorshid, Faisal Al-Kandari, Osama Al-Shaheen and Sadoun Hammad Al-Otaibi. Moreover, the request of the Public Prosecution to lift the immunity of MP Ahmed Nabil Al-Fadel for him to stand trial in a press misdemeanor case was approved in Tuesday’s session. The Assembly agreed as well to refer the Amiri Address during the inauguration of the 15th legislative term to the Amiri Address Response Committee tasked to prepare a report in this regard.