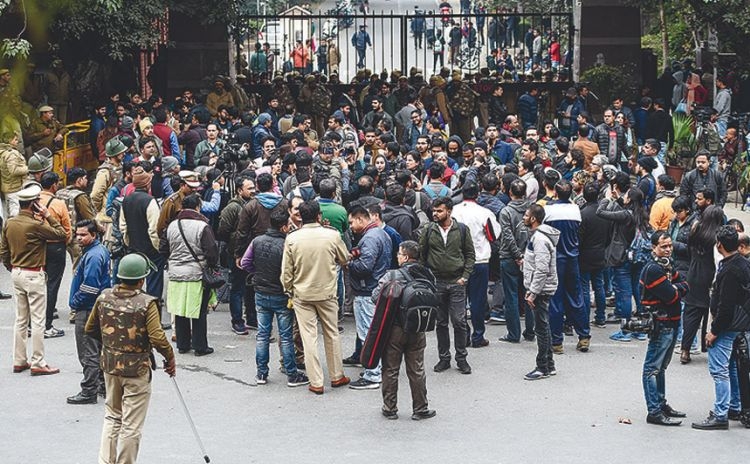 Protests were held across India yesterday after masked assailants wielding batons and iron rods went on a rampage at a top Delhi university, leaving more than two dozen injured. Controversy over Sunday’s violence at Jawaharlal Nehru University (JNU) comes as a new challenge to the government as it confronts major nationwide protests against a new citizenship bill that critics say is anti-Muslim. Meanwhile, New Delhi police are investigating how masked men burst into a leading university and attacked student protesters with sticks and rods, an officer said yesterday.

“Social media and CCTV footage will be part of the investigation,” said police official Devendra Arya, adding the violence at the university had prompted police to start a case. Students and some faculty of the Jawaharlal Nehru University have blamed the incident that injured at least 30 people on a students’ union tied to Modi’s Bharatiya Janata Party that has increasingly picked on the institution.

Students put out pictures of mobs entering university residential halls, their faces covered with cloth, carrying sticks and even sledgehammers. Some shouted slogans, threatening death for traitors. Students said police had failed to act, leaving them at the mercy of the mob.

Delhi police said they had launched an investigation.

Some students blamed the university attack on right-wing activists, but they also accused police of doing nothing to stop the violence. At least 28 students and teachers were injured, while doctors and nurses from a nearby hospital who went to treat them were also attacked, their union said.

Scores of riot police yesterday patrolled the university-the alma mater of several key ministers in Prime Minister Narendra Modi’s cabinet-picking their way past shattered glass and broken doors and furniture. They made no immediate arrests, but blamed the violence on “rival student groups”. As condemnation of the attacks spread, more than 1,000 people held a vigil in Mumbai. Other demonstrations were held in Bangalore, Kolkata and other major cities.

Nobel economy prize winner Abhijeet Banerjee, a former JNU student, said the attacks had “echoes of the years when Germany was moving towards Nazi rule”. Modi’s Bharatiya Janata Party denied claims by the opposition Congress that it was responsible, and in turn blamed left-leaning student groups which dominate the university’s politics. The government has promised an investigation, while home minister Amit Shah-a close Modi aide-told university administrators and police to maintain order at the campus, which has been tense since protests in November over fee increases.

The unrest comes as nationwide protests continue against a citizenship law passed in December that bars Muslims from a measure granting nationality to minorities from three neighboring Islamic-majority countries. Hundreds of thousands of people have taken to the streets across the country, and more than 25 people have been killed. Critics say the legislation goes against India’s secular constitution, but Modi says the new law is intended to help “persecuted” minorities. The street protests have further divided a country that gave Modi a landslide return to power in May last year. Modi’s opponents blame his policies for the country’s sluggish economy and social unease.

Meanwhile, India’s leading trade unions yesterday called for a general strike on January 8 to protest against the government’s “anti-people” policies. More than 60 student unions have supported the one-day strike. More than 30 people injured were admitted to the All-India Institute of Medical Science in the capital, a hospital official said, most of them with lacerations, cuts and bruises. The protests have persisted, with more demonstrations planned across India yesterday, prompted by the university attack.

The Akhil Bharatiya Vidyarthi Parishad, the students’ wing of the BJP, denied accusations that it was behind the attack, which it blamed instead on rival leftist unions. Authorities faced criticism for failing to rein in the violence on a campus viewed a center of resistance to Modi’s policies, including the abolition last year of special status for Muslim-majority Kashmir. As police watched … Amit Thorat, who teaches economics at JNU, said he called the police a little after 7 pm on Sunday but they didn’t come until an hour later. Nearly a dozen students Reuters spoke to said police watched as the mob rampaged inside the campus.

“I…hang my head in shame after witnessing video clips of goons merrily entering JNU campus, creating mayhem and grievously injuring innocent students, damaging public property and then exiting the campus,” Rahul Mehra, a lawyer for the Delhi police, said on Twitter. Even medical teams trying to help the injured were attacked, said Harjit Bhatti, former president of the resident doctors’ association at the All India Institute of Medical Sciences. “Our team of doctors, nurses & medical volunteers who reached JNU to give first aid to injured students & teachers, was attacked by hundreds of goons,” he said in a tweet. “Mob manhandled doctors, nurses & threatened them. Our ambulance’s glass & windows broken, this is totally inhuman & insane.”

Critics say the Modi administration is trying to crush dissent as it advances a Hindu-first agenda that undermines India’s foundations as a secular democracy. The citizenship law lays out a path for Indian nationality for minorities from six religious groups in neighboring countries but excludes Muslims. The government says the law is meant to tackle the grievances of minorities, such as Christians, Hindus and Sikhs, who face persecution in Afghanistan, Bangladesh and Pakistan.