Palestinians rage over US ambassador picture 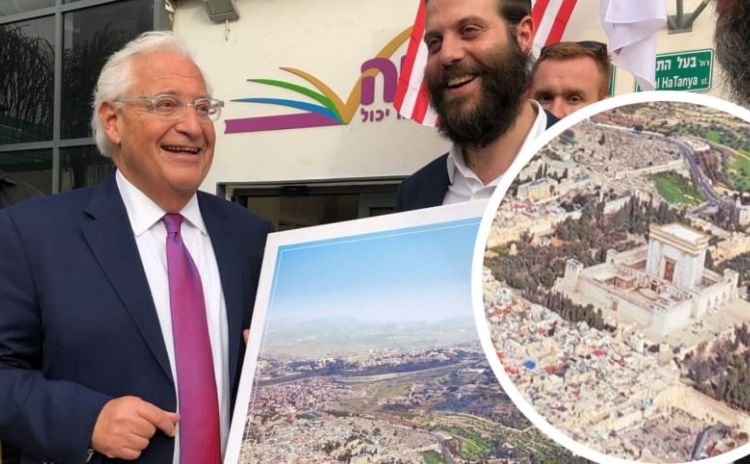 Palestinians condemned on Wednesday the photo of US ambassador to Israel, David Friedman, seen receiving from a radical Jewish party a picture of an aerial image of Jerusalem bearing a simulation of the Third Temple instead of the Al-Aqsa mosque and the Dome of the Rock.

"This fake picture of Jerusalem clearly reflects the manipulating mentality which is based on racial colonialism," said Palestinian government spokesman Yosif Al-Mahmoud.

The spokesman called on all Arabs to response immediately and prevent this attack by the ambassador against the holiest site and most sacred grounds.

Meanwhile, Sheikh Mohamad Hussein, the Grand Mufti of Palestine, said such photograph shows the true plans by the US alongside Israeli occupation forces' to destroy Al-Aqsa mosque.

He also warned that Al-Aqsa with all its buildings and spacious grounds belong to Muslims only, and he asserted on the importance of increasing security to protect the mosque.

"Friedman's appearance with the picture is considered a provocative move that represents a signal of racism and a criminal incitement to tear down Al-Aqsa mosque, and a clear adoption of radical Jewish fictional claims," said Palestinian Supreme Judge, Mahmoud Al-Habbash.

He added, "the removal of these Islamic sacred places in Jerusalem is a racist goal by extremists and the far-right that controls the occupying force." Palestinian ministry of Information also called on the UN to consider Friedman's behavior a provocation and a green light to execute terrorism acts which violates all international rules and regulations.