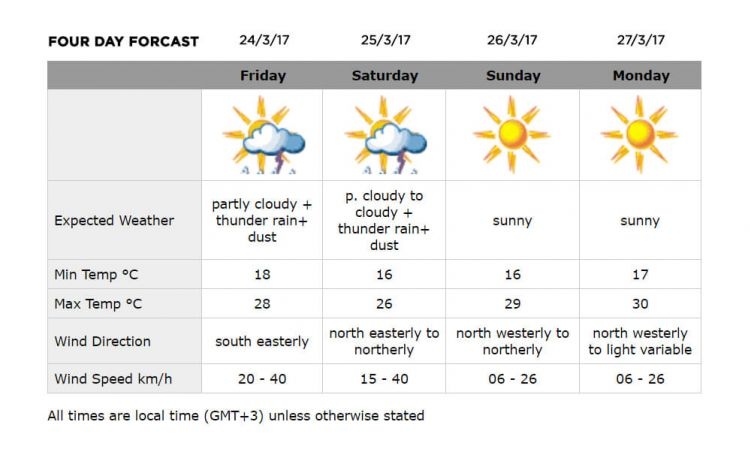 March 23: The Director of Kuwait Meteorological Department Emad Al- Sanousi said on Thursday that the country will witness unstable weather conditions during the weekend. Al-Sanousi told KUNA that the weather today was cloudy with moderate to fresh southeasterly wind at speeds of 25 – 50 km/h, which caused dust and rain.

Moreover, Friday evening will be partially cloudy with winds at speeds of 15 – 38 km/h and a chance for scattered rain. The temperatures will be between 14 – 16 Degrees. Saturday’s weather will be partly cloudy with light to moderate easterly to southeasterly wind at speeds of 10 – 32 km/h with a chance of scattered rain. The forecasted temperature will be between 26 – 28 Degrees. On Saturday evening, clouds will decrease, rain might be possible, while southeasterly to variable wind will dominate the weather at speeds of 6 – 26 km/h. The temperatures will be at 14 – 16 Degrees.