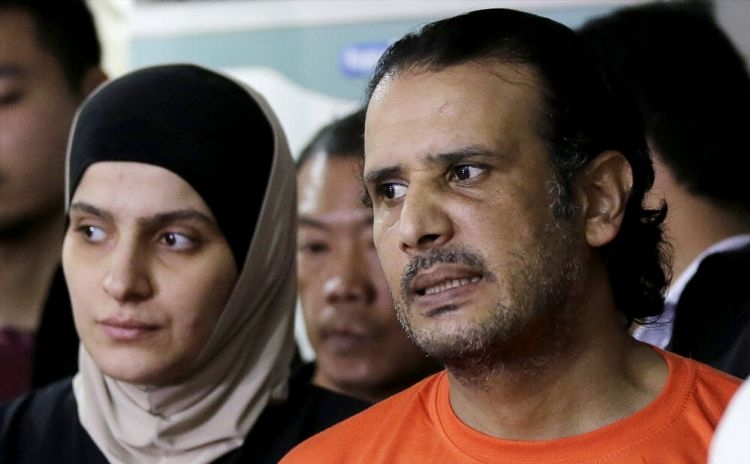 Security sources disclosed that a Kuwaiti security delegation will travel to Manila Sunday to complete the extradition arrangement of a Kuwaiti “DAESH” affiliate Hussein Al-Dhufairi who together with his Syrian wife were arrested by security authorities for planning to execute terrorist acts in the Philippines and Kuwait, reports Al-Seyassah daily.

The extradition arrangement is coordinated by the Foreign Ministries of Kuwait and Philippines respectively. Sources explained that raids conducted by State Security officers in Saad Al-Abdullah area resulted in the arrest of three relatives of Al-Dhufairi and seven members of his network — all of them are currently under investigation.

Meanwhile, there are ongoing investigations and raids to arrest any person involved with Al-Dhufairi, indicating police officers have been given orders to “shoot” right away if they encounter resistance from suspects. During the raid in Saad Al- Abdullah, according to Al- Anba daily, police seized materials used in manufacturing explosives and related documents.

The daily also said police are looking for yet another man, who is believed to be an active element of a terrorist cell. The house that was raided first allegedly belongs to the brother of the Kuwaiti, Hussein Al-Dhufairi who was arrested yesterday by security operatives in Manila, the Philippines along with his Syrian wife; and the second belongs to his nephew.

The daily quoting security sources said more arrests are expected to be made after Al- Dhufairi is ‘escorted’ back to Kuwait from the Philippines. The sources said the State Security raided the two homes in coordination and in cooperation with the Special Forces, personnel from the Explosives Department and sniffer dogs. During the raid, none of the men showed any resistance. They were whisked away for interrogation by the State Security police. Police also immediately interrogated several people living in both houses. A relative of Hussein Al- Dhufairi said that the latter was fighting alongside a terrorist organization in Syria.

However, after he slipped out of Syria, he headed to the Philippines for unknown reasons and was allegedly contacting the Kuwaiti Embassy in the Philippines to help him return to Kuwait. The Al-Rai daily said that Hussein Al-Dhufairi is the brother of Abdulmohsen Al- Dhufairi, a.k.a. Abu Jandal Al- Kuwaiti who was seen as one of the most dangerous Kuwaitis fighting alongside DAESH. He was reportedly killed months ago — a victim of international coalition bombing raid on the banks of River Euphrates.

Philippine Justice Secretary Vitaliano Aguirre II said the arrests were kept private to allow Philippine authorities to identify the pair’s local contacts and avoid the risk of their capture prompting possible accomplices to advance any planned attack. He said information provided by the US and Kuwait made the arrests possible. “I believe since nothing happened, we were able to nip whatever terrorist intention they have in the bud,” Aguirre said at a news conference in Manila.

Al-Dhufairi, a 40-year-old Kuwaiti, allegedly was an Islamic State group bomb maker who was helping plot attacks in Kuwait and possibly in the Philippines, Aguirre and other officials said, citing information provided by Kuwait. As he was led away at Thursday’s announcement, Al-Dhufairi said he needed a lawyer. Al-Dhufairi, who last entered the Philippines in January, first traveled to the country last year as a tourist and later got a work visa.