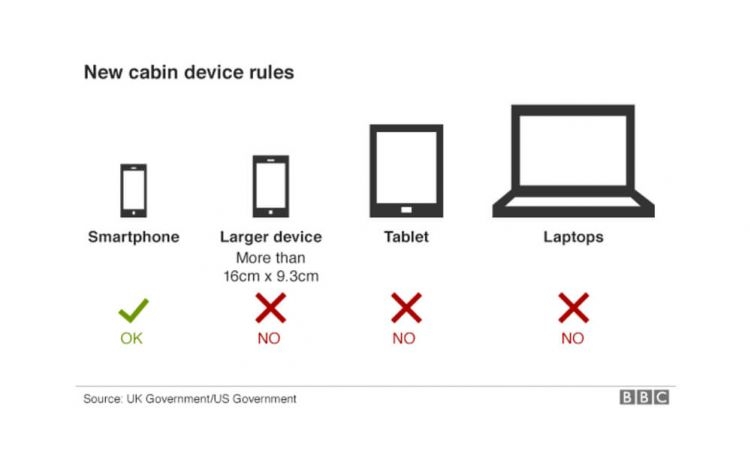 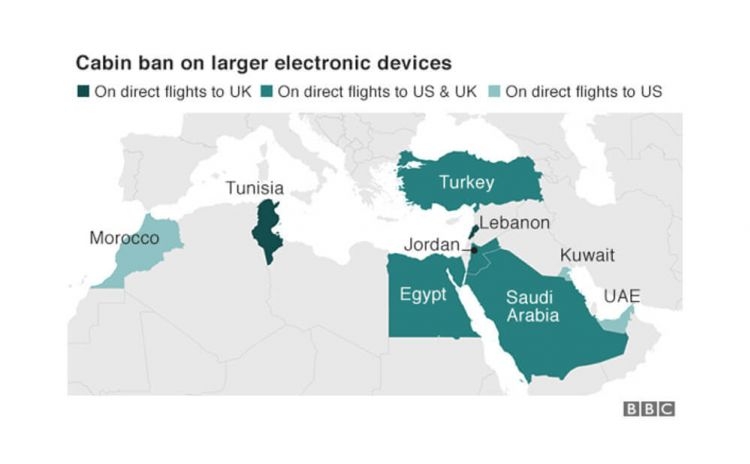 On Tuesday, the Department of Homeland Security (DHS) announced a ban on large electronic devices from cabin baggage on flights from nine airlines in eight countries across 10 airports in the Middle East.

The measure came after the department claimed that terrorists are seeking "innovative methods" to bring down passenger planes amid fears that bombs could be hidden in laptops, tablets, cameras, DVD players and electronic games.

The airports affected are:

Which airlines are affected?

Following the US ban, the British government announced that passengers flying directly to the UK from Egypt, Jordan, Lebanon, Saudi Arabia, Tunisia, and Turkey will be banned from large electronic devices into the plane cabin.

The banned devices are laptops, tablets, and phones which are larger than a typical smartphone, measuring 16 cementers by 9.3 cementers by 1.5 cementers.

"The additional security measures may cause some disruption to passengers and flights, and we understand the frustration that will cause, but our top priority will always be to maintain the safety of British nationals," a government spokesperson said.

"Direct flights to the UK from these destinations can continue to operate to the UK subject to these new measures being in place. Travelers are advised to keep up-to-date with the latest FCO travel advice and to check online with their chosen airline for further information," he added.

The US Department of Homeland Security earlier said the ban was implemented because they were "concerned about terrorists' ongoing interest in targeting commercial aviation, including transportation hubs.”

They said terrorists are "aggressively pursuing innovative methods to undertake their attacks.”

US President Donald Trump has been under fire by Muslim and human rights groups as well as his Democratic rivals and many of his Republican proponents since he started calling for a "total and complete shutdown of Muslims entering the United States" during his presidential campaign.

Following his inauguration on January 20, Trump has twice issued executive orders, banning people from several Muslim-majority countries, causing widespread protests in the US and several world cities. American courts have blocked Trump’s travel ban but the president has said that he is still trying to find a way to impose it.