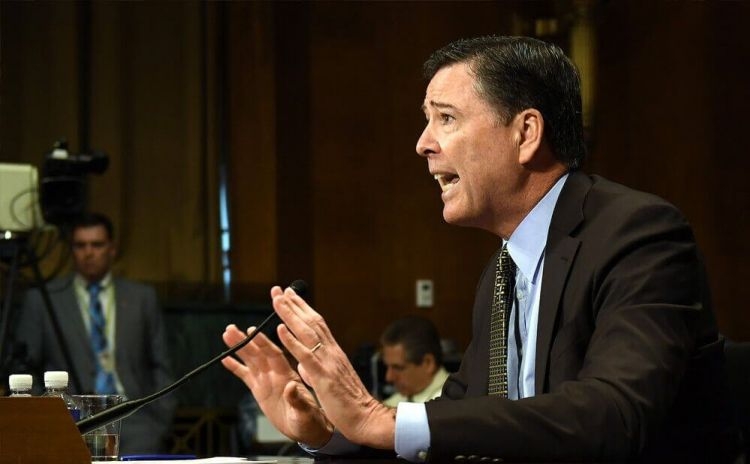 Comey was the most senior holdover appointment from the Obama Administration. The action follows reports, that also emerged Tuesday, suggesting Comey's testimony to Congress last week about Hillary Clinton's email scandal may not have been entirely accurate.

Back in March, Comey also said the FBI would look into Russian links to the Trump Administration.

In a signed letter, Trump informed Comey that he was "hereby terminated and removed from office, effective immediately," explaining that he reached the conclusion that Comey is "not able to effectively lead the bureau."

"It is essential that we find new leadership for the FBI that restores public trust and confidence in its vital law enforcement mission," Trump told Comey in the letter. "I wish you the best of luck in your future endeavors."White House press secretary Sean Spicer said shortly before 6 p.m. ET on Tuesday that Comey was "notified a short time ago," but declined to say how Comey was notified. Comey's dismissal took effect immediately.

Deputy Attorney General Rod Rosenstein made the case for Comey's dismissal in a memorandum to Attorney General Jeff Sessions, who agreed with the recommendation and passed it along to Trump.

At the center of Rosenstein's rationale for recommending Comey's firing was Comey's handling of the investigation into Hillary Clinton's use of a private email server, namely his decision to recommend no charges be filed and the news conference he held to explain his reasoning.

Rosenstein accused Comey of attempting to "usurp the attorney general's authority" by publicly announcing why he felt the case should be closed without prosecution.

"Compounding the error, the director ignored another longstanding principle: We do not hold press conferences to release derogatory information about the subject of a declined criminal investigation," Rosenstein argued in his memo.

"We should reject the departure and return to the traditions (of the bureau)," Rosenstein said. "The way the director handled the conclusion of the email investigation was wrong. As a result, the FBI is unlikely to regain public and congressional trust until it has a director who understands the gravity of the mistakes and pledges never to repeat them."

The White House said it will immediately launch the search for a new FBI director.

A senior administration official said most White House officials were not apprised of Comey's firing throughout the day, including fairly senior advisers.

But this seems to be among the leading reasons why Trump's schedule was all but empty Monday and Tuesday.

The President started calling key congressional leaders late today -- key senators and others -- but it was kept quiet until then.

Comey was appointed FBI director by President Barack Obama in 2013.

In so doing, he elevated a Republican law enforcement veteran who had been critical of the Justice Department under former President George W. Bush to the top domestic investigative and surveillance organization, among the most powerful posts in the world.

In the decades since former FBI Director J Edgar Hoover, the controversial director who brought FBI into the modern era, law enforcement has avoided the appearance of influencing politics the way Hoover did.

But Comey's decision to thrust himself repeatedly into the 2016 election, put him at odds with the FBI's general decision to stay away from the political spotlight.

Comey made the decision in July to go public with his recommendation that the Justice Department to not pursue any charges against Clinton or her former staffers over her email practices as secretary of state. However, he also took the opportunity to rebuke Clinton at length as being "extremely careless" with sensitive information.

Then-candidate Trump had talked up the investigation until this point, at which time he and his campaign derided Comey for the "political" decision.

Just days away from the election, Comey jumped into the race again. He informed Congress, via letter, that the FBI had re-opened its investigation into Clinton. The decision was made because of its investigation into former Rep. Anthony Weiner, who is married to Clinton confidant Huma Abedin. Comey followed up days later with another letter, informing Congress that the FBI didn't find anything and continued to believe Clinton's practices did not merit the pursuance of any criminal charges.

After Clinton's loss, former President Bill Clinton blamed Comey for it, as have many Clinton staffers, at least in part.

Over the last few months, there has been tension between Justice Department leadership and senior staff of FBI regarding the handling of the Clinton investigation and how Comey was running the agency, according to multiple officials.

One Justice Department official suggested there could be more changes coming at the FBI.

"There is a lot of cleaning house that needs to be done," one official said.