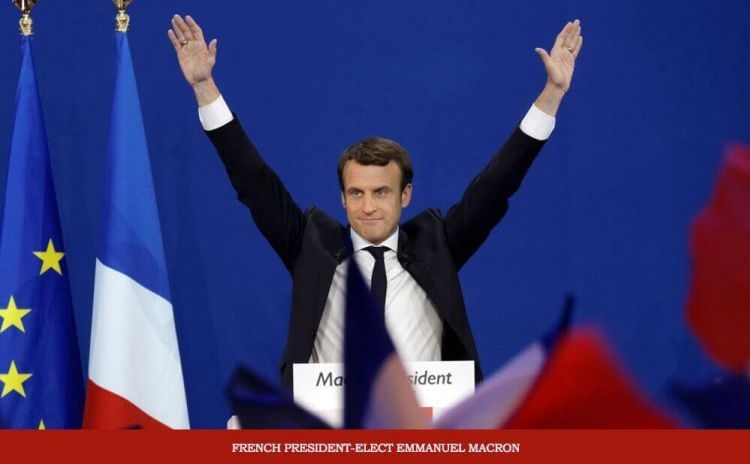 A Downing Street spokesperson said: "The Prime Minister warmly congratulates President-elect Macron on his election success. France is one of our closest allies and we look forward to working with the new President on a wide range of shared priorities." Meanwhile, the White House congratulated Sunday President-elect Emmanuel Macron and the people of France on their successful presidential election.

The White House said in a statement, "we look forward to working with the new President and continuing our close cooperation with the French government."

Rajoy sent a cable of congratulations to Macron in which he stressed that big support of voters and reform tendency would enable France to play an effective role in enhancing the European Union.

Rajoy said that France is a neighboring and a strategic friendly country for Spain.

The Spanish Premier expressed his confidence that ties between France and Spain will be stronger and soldier under the reign of Macron.

"Congratulations, Emmanuel Macron. Your victory is a victory for a strong and united Europe and for French-German friendship," Merkel told Macron in their first post-election phone conversation according to the Chancellor's Spokesman Steffen Seibert.

He added that Merkel also told Macron she appreciated "his advocating for a united and open Europe during the electoral campaign." Centrist, independent Macron easily defeated Sunday far-rightist National Front candidate Marine Le Pen in the second round of the French presidential election.

On another front, European Commission President Jean-Claude Juncker also congratulated Emmanuel Macron on his election as President of France.

"I am delighted that the ideas that you have defended for a strong and progressive Europe that protects all its citizens are those that France will bring under your presidency in the debate on the future of Europe," said Juncker in his congratulatory message to Macron.

The leader of European Socialists and Democrats in the European Parliament Gianni Pittella welcomed with relief the result of the French presidential election.

"In the face of the dark and regressive campaign of the Front National candidate, the victory of Emmanuel Macron is a relief for France, and also for Europe. The worst-case scenario has been avoided," he said in a statement.

"However this victory has a left bitter taste in our mouths. An extreme right candidate, who aimed at making the destruction of the EU her business, has gathered more than a third of the votes. All European democrats must wake up," he added.

Belgian Prime Minister Charles Michel congratulated Macron saying his victory "is a clear rejection of a plan to retreat from Europe." He added that the victory of Emmanuel Macron must be an opportunity to gather all the good will to reinvigorate the European project.

"We must also continue and strengthen the close cooperation between our two countries for security and the fight against terrorism," he added.