Bye Bye Twitter. All the cool kids are migrating to Mastodon. 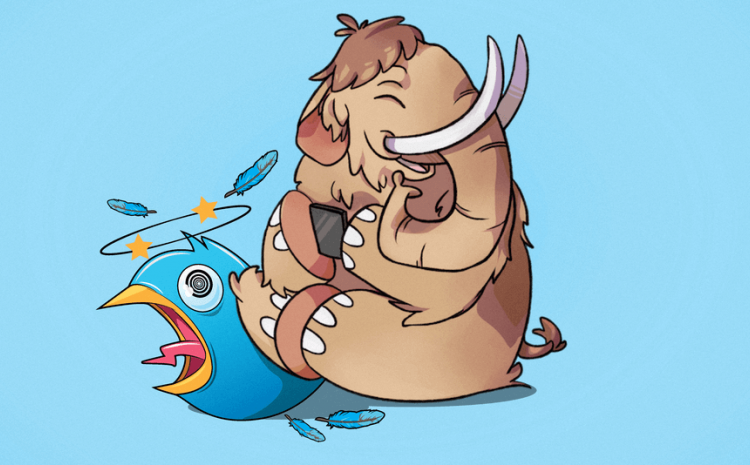 In the battle between a massive prehistoric beast and a fluttering bird, we all know what's destined to come out on top. But in the case of Mastodon, a social network with the potential to take on Twitter, the former just so happens to be the underdog. And yet, it's an underdog with serious spunk.

Importantly, Mastodon is not a third-party Twitter client, but its own service entirely. What makes it stand out? It has better privacy controls than Twitter. Also, neo-Nazis are explicitly banned.

So what, exactly, is it?

Mastodon is a type of free and open source software (FOSS) known as "GNU social." That means Jack Dorsey doesn't own it, and there is no board pressing Rochko to monetize user data or resign.

In fact, money doesn't seem to be the point at all. Rochko, who lives in Germany, has so far managed to fund the project with just a Patreon account. (Patreon is a service that allows people to make recurring micro-payments to creators.) His target goal, which he has surpassed, was only $800 a month.

"I am not interested in VC funding, monetizing, advertising, or anything of that sort," writes Rochko on the Mastodon Github page.

Once you wrap your head around the complicated backend (see below), the Mastodon interface quickly feels intuitive, and, well, like a better version of Twitter.

Mastodon users can send toots with 500 characters as opposed to Twitter's 140. But that's not the only difference. Individual toots can be marked as private, meaning you don't have to choose between a public or a private account like on Twitter. 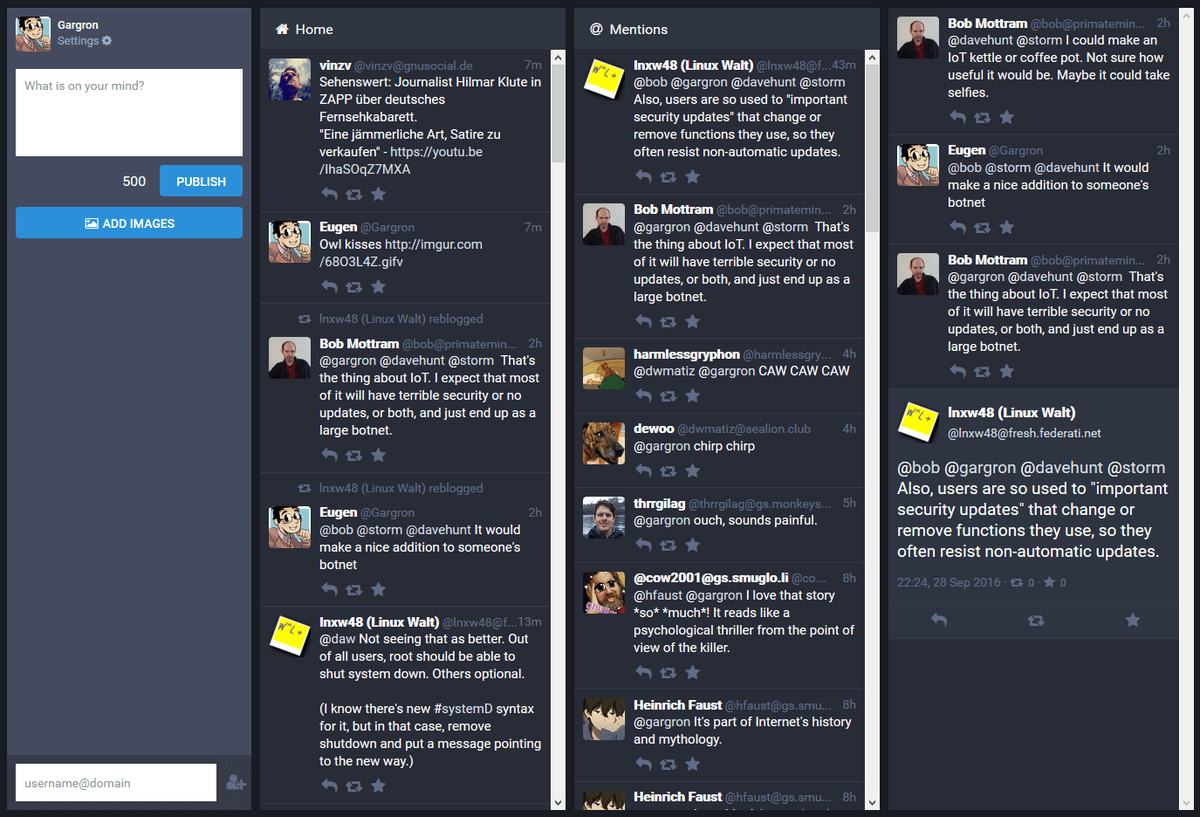 Additionally, in a move seemingly designed to send the Pepe the Frogs of the world into a rage, the ability to create safe spaces is prized. In addition to being able to make individual toots private, users can tag their posts with a "content warning" — automatically hiding part of the message until another user selects to display it.

In addition to the distributed Patreon funding model, decentralization is key to Mastodon's DNA.

"There are different ways in which something can be decentralized; in this case, Mastodon is the 'federated' kind," explains Rochko. "Think email, not BitTorrent. There are different servers ... users have an account on one of them, but can interact and follow each other regardless of where their account is."

To flesh out Rochko's analogy, people with a Gmail account can email those with a Yahoo email address. They are two different services, but they both talk over the shared platform of email. In the same way, users on different Mastodon servers can still talk to each other.

To take it further, it's as if there were a bunch of discrete Twitters with users able to tweet in the same communal timeline. With Mastodon, that communal pool is known as the "federated timeline." Think of it as a single Twitter feed containing everyone's tweets (a.k.a. toots), even if users are on different servers (a.k.a. instances).

Each server, or instance, in Mastodon parlance, has a local timeline as well, only visible to users on that instance. For added privacy, users can choose which primary instance their posts will be in. Only want to toot in the Animal Rights instance? You can create an account there and do that.

There are a ton of different instances, but not all of them talk to each other. One popular instance, Awoo.space, only links up with the "flagship" Mastodon.social and no others. For its part, Awoo is more heavily moderated than Mastodon.social with its mods aiming to create a safe and queer-friendly space.

So why the different servers? For one, it makes it easier to run as a non-commercial enterprise if the costs are distributed among a bunch of volunteers. Also, if someone gets bored and stops managing a server, the entire ecosystem doesn't go down with it.

Basically, unlike other challengers to come onto the social media scene, Mastodon has the potential to stick around for awhile.

At the time of this writing, Mastodon.social has 41,703 users. That is unlikely to change in the immediate future as Rochko was forced to close registrations due to the heavy server load caused by the influx of new users. In response to this, signups are hitting other instances hard — and at least some of those members are not happy about it.

"Who let the tech bros in i [sic] thought this was a safe space," tooted one user on Awoo.

The dreaded tech bros aren't the only ones mucking up the Mastodon playing field. Brands appear to be moving with, frankly, impressive speed to capitalize on what may very well become the next "thing."

We reached out to Walmart to determine if this is in fact a legitimate account, but have yet to receive a response.

As more and more people flock to Mastodon, and instances are set up outside of Rochko's control, the scene is bound to get more rowdy. Whether that rowdiness adds to the initial Mastodon character or trends toward abuse remains to be seen.

There are clearly some bumps ahead in Mastodon's road to widespread adoption, and it's anyone's guess as to whether it will ever really challenge Twitter's dominance in the micro-sharing game. But maybe Mastodon doesn't have to compete to succeed.

Mastodon is a free, decentralized, non-commercial version of Twitter with better privacy controls and a more intuitive interface. For now, that feels like a much needed breath of fresh air in an increasingly stale social-media landscape.